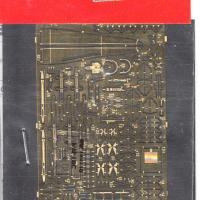 Brengun has been bringing out more and more stuff in 1/144 scale, kits, accessories and detail sets. This is darned good, because those of us who do “Braille scale” need more and more help. Many of the older kits are so lacking in detail that any addition would be SO welcome. And this is one of those detail sets.

So on to the adventure. The detail set is a single PE fret, approximately 3 ½ by 6 ½ inches. (9cm X 16.5cm). There is a single page instruction sheet which shows the Revell parts replaced by PE parts and the PE add-ons for some parts.

The first steps are to detail the cockpit. A new control panel and side panels are provided. I painted these black and added white splotches where the gauges were. Then I had a bright idea, and used the kit panel decals on the main panel and side panels. This worked pretty well. There’s also a pull ring for the ejection seat, a detail panel for behind the seat, and a gun sight with two clear panes provided. I held the gun sight off until much later in the project, as I tend to knock small parts off while gluing, painting, and decaling.

Once the cockpit was done, it’s installed in the fuselage, and the fuselage is assembled. I then added the panels that go under the leading edge extensions along the front of the fuselage. I found these to be quite handy, as they cover a seam nicely. Wow, a detail set that SAVES me some work. The LEX panel on the left side has a cut out for the boarding ladder. Another detail I wouldn’t work on until a lot more is finished.

I next decided to try the fins on one of the sidewinders. Brengun provides a set of alignment templates for the fins. They’re just a square piece of PE with a hole for the missile body and slots to hold the fins for gluing in place. I tried using CA glue on the fin, but the CA followed the fin and glued the fin to the template. So I tried using white glue. Same basic result. When I tried to remove the template, two of the fins pulled completely off, and one of the others was moved out of alignment.

The templates are a marvelous idea, but I couldn’t make it work. Probably lack of skill or method on my part.

There are tiny parts to replace the control actuators on the wing. I skipped these, following my less than successful attempts at applying wing fences on some 1/144 MiG-15 kits. I went on to do the sidewinder mounts on the wing tips. This was fairly straightforward, scraping the missile mount lug off and gluing the PE part on to provide extra detail.

By now the model had been painted and decals applied. I was about ready to install the landing gear, but decided to do the gun sight and windscreen first. The gun sight is a single PE part that is folded into a U shape and glued to the area above the control panel. I put the part on and glued it with a small drop of CA. For once this worked fine for me. I painted the gun sight base black. The next step was to gently cut out those small clear parts and apply them to the gun sight. I used Micro Krystal Kleer to glue the clear parts on, and this worked marvelously. I then applied the detail part to the edge of the windscreen, which are handholds and mirrors. Here again Krystal Kleer worked. I also put the detail parts on the main canopy front edge. I then installed the windscreen, but held the canopy until I was finished handling other details.

The last detail I worked on was the boarding ladder. This was a super bit of detail, adding a lot to the look and authenticity of the model. But the ladder required that the sides be folded perpendicular to the steps, and then the steps folded so they were flat, like a step ladder. Every one of the steps broke off. I think there’s just not enough material there to handle the repeated folding needed on those joints. I really wanted that ladder, and it didn’t work.

I put the landing gear on, and the wheel well doors. I then put the canopy on, and the project was completed.

Recommended with some reservations. This is a detail kit for someone with very good eyesight and manual dexterity. Not to mention the ability to glue on small parts. The cockpit and leading edge extensions are marvelous. The templates for the rocket fins are a great idea which I couldn’t make work. I mourn the loss of that boarding ladder. This detail set would be a super addition to a kit if it was in a larger scale, maybe 1/32 or 1/48.