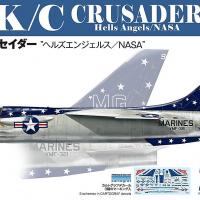 Courtesy of Platz (Japan): The world's first supersonic fighter was the American F-8 Crusader. Development proceeded according to the requirements of the US Navy, and the first flight was successful completed in 1955. Operation started in 1957.

The F-8 Crusader adopted a high wing swept wing design. The wing had a special mechanism that raised the front by 7 degrees. This slight operation succeeded in keeping the distance between takeoffs and landings short. The F-8 demonstrated excellent performance as an on-board fighter operated on an aircraft carrier. The aircraft was equipped with a 18,000 pound thrust engine with an afterburner and was adopted and operated by the US Navy, the Marine Corps, the Philippines, and France.

The model is a plastic model assembly kit that reproduces the F8 Crusader fighter operated by the US Navy in 1/144 scale. This kit, with parts for two complete aircraft, is a remodeled version of the F-8C and models the F-8K type with upgraded parts. The total length is 11.5 cm.

Three types of markings are available:

As noted above; the marking option decals are printed by Cartograf of Italy. Included amongst the decals are the complete fin flash for two active duty aircraft as well as decals for the canopy framing for all three options. Alone, the inclusion of just those decals makes this kit worth the price of admission. For them that model in this scale you know how cool that really is. You will need to do some painting as the decal is just for the forward section (windscreen) of the canopy.

In addition, the Marine Corp F-8 does have a rather snazzy paint scheme ( attractive blue spine) that was applied to the aeroplanes spine and dorsal fin. One thing to be aware of should you choose the NASA F-8, the 'Digital Fly By Wire” flash along both side of the fuselage will need to be applied before you attached the horizontal stabilizers.

The breakdown of the parts is pretty standard for just about any aircraft model, regardless of the scale. You get fuselage halves (split vertically), a two-piece main wing, separate and pose-able horizontal stabilizers (two types), delicate and in-scale landing gear with wheels/tires, an exhaust tail cone with some brilliantly molded detail, as well as a number of weapon pylons common to the Crusader.

The 'under wing' stores consist of Sidewinders for the fuselage mounts and two Bull Pup missiles. I couldn't find where these weapons were mounted on operational aircraft (F-8 K), so best check those references. But just including them is kinda cool. I chose not to include them with my build as NASA research aircraft are softened not armed. I did add a photo of the under wing stores for your viewing enjoyment.

Platz does provide dimples on the lower wing half that will need to be opened, that I assume, are for mounting the under wing stores pylons. The assembly instructions, all in Japanese, do not seem to mention this option but then again my Japanese reading skills are non-existent so I could have just missed it. If you choose an unarmed F-8 you might wish to remove the small mounting tab (for the 'Y' pylons) that is molded onto each side of the fuselage.

The single, clear part provided is for the canopy and it fits well. Overall the kit goes together without much fuss. Just pay attention to the parts number and its position on the model. Case in point: the main landing gear are provided as right and left sided. There is some molded detailed on those main gear legs that will go missing if you don't get them situated properly on the model. Oh, the two-piece wing mentioned earlier, is pose-able. All parts exhibit nice recessed panel lines and fine engraving throughout.

One neato aspect that having two complete kits in the box gives you is that it allows the serious modeler the option of dropping the flaps, opening avionics bays , etc just by scavenging the needed parts from the other kit. Not me, but somebody!

This F-8 Crusader twofer from Platz is most welcome edition back to the market place and with the newish marking options, some colorful editions, as well.

My thanks to Platz and IPMS/USA for the review copy.