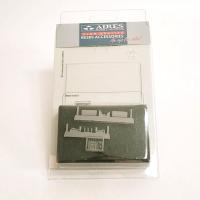 A Ram Air Turbine (RAT) is commonly found on modern aircraft – both military and civilian -- and is used only in emergency situations. In the event of the loss of primary and auxiliary power sources, the RAT will be deployed to power vital systems of the aircraft such as flight controls, hydraulics, and instrumentation.

The AIRES Ram Air Turbine featured in this review is designed for the 1/48 Tamiya F-4B Phantom II. For review purposes, I used a spare fuselage of this kit.

In terms of the practicality of using this accessory with your Tamiya F-4B Phantom II build, you would want to use it if your intention is to pose the plane in maintenance mode. This is due to the fact that the RAT would only be opened up for maintenance purposes while the plane is on the ground (or if there is an in-flight emergency).

This AIRES kit nr. 4868 comes with three resin parts and one instruction sheet. One of the resin parts is the RAT bay, which is not attached to any base or sprue. It is highly detailed and very clean. Of the two resin sprues, one contains the generator mechanism and fan blades, and the other contains two access panel doors and actuator arms.

To begin, the model builder will need to decide whether to pose the RAT with the generator extended (as in this review article) or retracted. Once that decision is made, refer to the Step 1 of the instructions and identify the parts you need.

I carefully removed generator part RP2 and attached the fan blades per instructions. Note: these parts are very fragile. Please use an appropriate tool (razor saw) to remove them.

Next, I carefully removed the access panel doors and then the actuator arm. I primed all of the parts – including the generator assembly – with Tamiya Fine Surface Primer.

I prepared the fuselage to receive the accessory. Placement of the RAT is approximately at the center on the left side. I outlined the area and then used a razor saw to carefully cut an opening. I sanded the four edges to clean up the opening.

Next, as indicated in Step 4, you must remove plastic from the inside of the fuselage in order for the RAT to seat properly. I tried several methods: sanding sticks, mini rasps, and scraping. None of them worked. I ended up using my Dremel tool with a burr tip and carefully began removing plastic and being very careful not to blemish the edges of the opening. I test fitted the part several times and continued removing plastic until it fit as it should. See photo 9.

Moving on to final painting, I consulted the recommended reference source cited in the instruction guide and painted everything with Tamiya lacquer Italian Red LP-21. Once dry, I painted the blades white, actuator arms and hydraulic lines silver.

The final stage of the build was to mount the RAT to the internal side of the fuselage. Note: Step 3 indicates to install the actuator arms. DO NOT do this until you have mounted the RAT to the fuselage. I followed the instructions as they are written, but during test fitting and final mounting of the RAT, the actuator arms broke off. See photo 11. They are extremely fragile. I strongly recommend you wait until the RAT is seated and then insert the actuator arms at the very end. To complete the build, I attached the access panel door.

This is an interesting accessory in that it provides unusual detail to the Tamiya F-4B Phantom II, but it’s use is a bit narrow since the RAT would only be open if the plane is in maintenance or emergency mode. Quality-wise, it is excellent as all AIRES products are. The assembly is not too difficult and requires minimal tools (razor saw, Dremel-type tool). Once completed, it is actually very interesting to look at. It would definitely be an attention getter for your model! Overall, I would highly recommend this product to all of the F-4B Phantom II fans out there who want to accentuate their model in an interesting way!

Thank you to AIRES for providing the sample for review, and thank you to IPMS USA for the opportunity.