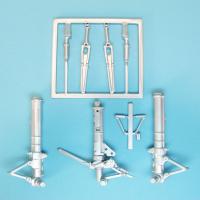 SAC has recently issued a replacement cast white metal gear set for the new third in a series Kitty Hawk F-35s in 1/48thnd scale. Following the issue of the Kitty Hawk’s F-35A and F-35B, the F-35C is the U.S. Navy version with larger wing surfaces and heavier landing gear suitable for carrier landings.

I will be using the Kitty Hawk instruction parts numbers to identify the corresponding SAC parts.

For the front landing gear both the kit and SAC parts are merged together to complete the subassembly. The front landing gear consist of kit parts E6, E29 and SAC replacement parts E11, E13, and E14. I assembled the three cast metal parts together first after some minor clean up using an X-acto knife #11 blade, a pin file and a flex file. Medium speed gap filling super glue assisted in the construction allowing sufficient time to align the parts and check fit prior to application of accelerant. This glue also works well when bonding the dissimilar materials like plastic to metal.

The starboard main landing gear strut consist of SAC part E8/E41 and actuators E34 and E37. The port side gear is strut E7/E46 and actuators E35 and E47. As with the front gear these parts were cleaned up using an X-acto knife #11 blade, a pin file and a flex file. Some additional filling was needed where parts E34 and E35 attach to the main strut. This was accomplished with again the medium gap filling super glue.

After cleaning and sanding my replacement gear I mounted them to spure using super glue. Then they are primed using Tamiya Fine Surface Primer for Plastic and Metal (white). Next I shot them with Tamiya X-2 Gloss White and allowed them to dry in the dehydrator for an hour. Details such as the oleo struts and all the bolts heads were then hand painted using Model Master Chrome Silver. Once fully dry (about 4 hours in the dehydrator) they were airbrushed with Pledge multi surface floor care (Future) to facilitate weathering. Relief details were then drawn out using AK enamel wash for interiors.

When comparing two photos found online, the Kitty Hawk and SAC’s landing gear are fairly accurate to the actual aircraft. Some of the main difference between the aircraft variants is the Navy “C” model has two front wheels and a pull bar for the launch shuttle. This is captured accurately. The main gear actuating piston is inaccurate because it is too short. It suffers from this because it has an inaccurate (too high) location of the strut side mount. SAC’s direct copy of the Kitty Hawk gear did not correct this small flaw. Unfortunately, neither set provides decals to represent the stencils that exist on the F-35C aircraft landing gear.

I feel the SAC gear are a strong replacements for the kit gear and took just over 2 hours to build, paint and finish.

Thanks to Ross MacMillan and Scale Aircraft Conversions for the chance to review the F-35C Lightning II landing gear and to Dick Montgomery, Dave Morrisette and the support staff of the IPMS/USA reviewers corps.