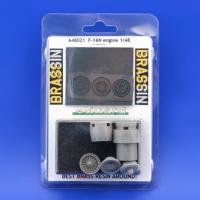 Well known for their exceptional photo-etched parts, Eduard recently crossed over to the resin world with the introduction of the Eduard “BRASSIN” line. The sets under this line consist of high quality resin castings with Eduard’s exception photo-etched parts. [Some sets also contain color photo-etch and/or mask sets.] The latest in this new product line is a 1/48th scale engine set for the F-16N. The set consists of the exhaust and the intake fans for F-16’s powered by the F110 GE-100 engine. While billed for the Tamiya kit, the set can be used for any F-16 featuring this engine.

The set comes as five resin pieces and a small fret of photo-etch holding three more pieces. While the photo-etch is the always the high quality we’ve come to expect from Eduard, the resin is what really struck me. The casting is extremely well done, and completely free of defects. The casting method eliminates those large pour plugs we are used to seeing with resin. Instead it has a large plug that attaches to the actual part with just a few thin slots.

Cleaning up the parts has never been easier. I was especially impressed with the design for the parts. The intake comes as two overlapping parts: one of which features the angled fan blades with deep crevices in between. The exhaust was one of the best I have seen. The nozzle “feathers” are cast as one piece, separate from the “can”, which in turn is separate from the fan blades. The photo-etched parts are then stacked to create the afterburning grates. The nice thing is that not only can you paint the afterburning grates separately, allowing for weathering; they stack onto the resin section and self-center. This design gives spacing in between, and creates realistic depth to the piece.

Overall I would have to say that Eduard’s new BRASSIN F-16N set is excellent. The detail is great, it takes paint without issue, and the casting is some of the best I’ve seen. I would highly recommend this set to anyone who wants to spruce up their F-16N. My thanks to Eduard and IPMS/USA for providing the review sample.