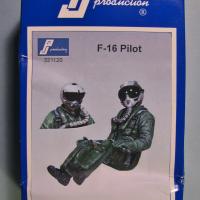 Are you looking to add a little life to your 1/32 scale F-16 Fighting Falcon? If so, you may want to consider the latest release in this scale from the folks at PJ Production. This is the third PJ Production figure that I have had the pleasure of reviewing, and like the other two, assembly was easy, with minimal part clean-up being required. The detail is reasonable for this scale, and the figure can be used with the Tamiya, Hasegawa, or Academy kit. The only modeling skill required involves painting a figure; otherwise, I would recommend this as an item manageable by modelers of nearly any skill level.

There are a mere six parts for this particular figure, consisting of the body, arms, two optional heads, and a piece of tube for the oxygen mask. I found the resin easy to work with as I cut the parts using my razor saw. There was no issue with the fit of any of the parts for the figure, so no filler of any type was needed to fill gaps between pieces, which can sometimes happen with resin. I used a thin CA to assemble my figure, and this held the parts in place with no issues.

To paint my figure, I used Vallejo Green-Gray (RLM 02), Model Master Enamel SAC Bomber Green, Andrea Flesh Base, Model Master Lacquer Silver, Model Master Acryl Aircraft Gray, Gunship Gray, Aircraft Interior Black, and Gloss Black as my base colors. The color for standard flight gear is sage green, and I have found that the SAC Bomber Green is a close match for this, and the Green-Gray provided a nice contrast for the G-suit, which is typically darker than the flight suit worn underneath. Although shoulder patches are molded in, I did not paint them for this review, as I have not decided which squadron I will represent with my F-16 when I build it. I applied a Micro Flat finish that is not flat enough for my liking, so I will be touching that up at some point prior to installing the figure in a cockpit.

My hits for this release would start with the level of detail, which is good for this scale, and that the moldings were crisp. The fit of the arms and head were without issue, and the pose looks natural. The option of a second head is nice as one is wearing the HU-55 helmet and the other has a JHMCS helmet, which is more recent. If using the JHMCS helmet, the figure will be looking more forward as the oxygen hose/communication line connect left of center on the mask.

I do not have any true misses to mention on this particular item. As with my previous PJ Productions reviews, my one piece of feedback would be that it would have been nice to have some color recommendations for painting, but this is not a big issue, and a person purchasing this item will likely have reference materials on hand to aid them as I did.

In conclusion, I would highly recommend this figure to anyone wanting to add a nice pilot to the cockpit of his or her 1/32 scale Fighting Falcon. With some minor clean up, this item quickly builds up into a very nice figure representing the outfitting of a typical F-16 pilot in their slightly reclined position.

I would like to thank the folks at PJ Production for providing this kit to the IPMS-USA for review, to Dave Morrissette, who runs the review corps, for selecting me to do the build, and to you for taking the time to read my comments.