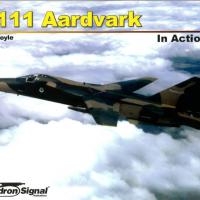 David Doyle’s latest book continues to expand on Squadron Signal’s long standing In Action series that initiated back in 1971. This is a completely updated and expanded edition over Squadron’s earlier Aircraft In Action number 35, a 50-pager on the F-111 by Lou Drendel that was published in 1984. This 2019 release is a totally new book that can be considered complementary to the earlier In Action. This latest edition focuses on color photographs (although black and white pics are used where appropriate) in addition to the additional 30 gloss pages.

After many years of being published in enthusiast publications focused on military vehicle restorations, David Doyle ‘graduated’ to full-fledged books in 2003. His first book was a hefty 512 page history of US military vehicles. He has now had more than 100 books published in military vehicles, aviation and naval topics. David and his wife Denise have amassed a collection of ten Vietnam era military vehicles that still displays at shows. In June 2015, was honored with the Military Vehicle Preservation Association’s Bart Vanderveen Award, given in recognition of "...the individual who has contributed the most to the historic preservation of military vehicles worldwide." Be sure to check out David’s website at www.DavidDoyleBooks.com where you can see and buy at a discounted price off of MSRP all his books that are still available.

This book follows the normal format of the current 80-page In Action series, detailing the development and service history of the General Dynamics F-111 Aardvark. This is expanded from Squadron’s previous standard 60 page version of their In Action format and it runs 80 pages packed with large, clear photographs. The front cover features a color photograph of “Karma 54”, a F-111F, serial number 70-2415, a veteran of Operation El Dorado and Desert Storm. The rear cover features an F-111A in a hard left over a desert bombing range. I counted 175 well captioned photographs; 175 in color and 50 in black and white. There is one line drawing 3-View and five color profiles depicting the variants by Matheu Spraggins.

Robert McNamara was appointed Secretary of Defense in January 1961 at a time when both the US Air Force and US Navy were attempting to solve very different design requirements. McNamara decided that both services would have to share their next generation aircraft which generated the Tactical Fighter Experimental (TFX) program despite both services objections. The down-select came down to proposals from Boeing and General Dynamics. Despite both services preferring the Boeing option, McNamara chose the General Dynamics option. The F-111 would become the first full production aircraft with variable geometry wings. The Air Force variants would go on to be a successful aircraft, serving for over thirty years. The Navy bailed on the F-111B variant and pursued the Grumman F-14 Tomcat.

David Doyle provides a short introduction on the F-111 genesis and then launches into the well captioned photographs. There really is not a Table of Contents, or even sections dividing up the different variants. David does cover all the F-111 variants with photographs.

I found some very interesting photographs of the Aardvark. Page 13 features photos of the F-111A production line in Fort Worth. One picture depicts an F-111A in a climatic research laboratory where extreme-freezing trials are ongoing. This could be a very interesting diorama project. A comparison of two F-111Es is shown on Page 29. The top F-111E is the first of its kind, here flying with Edwards AFB. It carried a white radome compared to the F-111E on the bottom of the page with the black radome. Page 42 features two rear shots of a EF-111A above a color side profile by Matheu Spraggins. A couple of special Aardvarks are on Page 69. The first FB-111A is wearing a rather bright paint scheme while based at Edwards AFB. The NF-111A served with NASA at the Dryden Flight Research center to explore transonic technology.

This is a gorgeous soft-bound book and is well worth the money. David Doyle provides lots of detailed photographs with detailed captions with many of these photos finding their first time in print. I appreciate Squadron’s effort to bring out new releases of their older books with an emphasis on color and an additional page count. Of course, in this case, you will want to keep the older Squadron In Action since there are very few photograph duplications, if any.

My thanks to David Doyle Books at (www.DavidDoyleBooks.com) and IPMS/USA for the chance to review this great book.