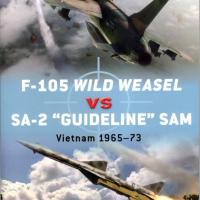 I was somewhat familiar with the two opponents in this duel, having built the 1/72 Monogram F-105G a while back, and I’ve got the Gran kit of the SA-2 in the “to build some day” stash. I also have a copy of a video produced by the Air Force which features the development of the F-100 Wild Weasel mission, with interviews with the participants.

The Suppression of Enemy Air Defenses (SEAD) is a cat-and-mouse game. The aircraft tries to get the ground radars to come up so they can fire anti-radiation missiles. The ground systems try to get the aircraft to come in range of the missiles and anti-aircraft guns which surround the SAM site.

As I read this book, the question raised was, “exactly which player is the cat and which the mouse?” And what’s that ferret doing in there?

The book is divided into eight main sections, each covering the F-105 and then the SA-2.

I found the chronology to be interesting, and the sections on the Strategic Situation, the Combatants and Combat to be a great read.

The narratives go something like this… The USAF used the F-100 Wild Weasel to find SAM radars, and then bomb the sites. The NVPA put AAA on the approaches to the SAM sites to shoot down the attackers. The USAF then got the AGM-45 Shrike from the Navy, which could home in on the radar from slightly out of range. The NVPA then would either turn off the radar as the missile was fired or use two radars to confuse the anti-radiation missile (ARM). The North Vietnamese also developed a method for missile guidance which consisted of 2 people sitting on top of the radar, manually controlling the missile.

The NVPA would build several SAM sites in an area, but only use one for a while, then move on. The USAF would find these sites through aerial reconnaissance and bomb them. The VNPAF would have MiGs in the area of these strikes to harass and shoot down the bombers.

From the air, SAM hunting was no game for the faint of heart. The idea was to have the Weasels in front of a strike mission to find the SAM sites. It was also necessary to get them away from the jamming pods on the strike aircraft. When the radar, either the Spoon Rest or Fan Song came up, the Weasel would try to locate the radar site and attack it. The possibility of AAA or interceptors was ever present, as well as the possibility of a SAM launch.

On the ground, it must have been very stressful to sit in a closed radar van, knowing you could be a target for missiles, bombs, or strafing at any moment, with no way of knowing if the attack was coming and no place to hide. Also, the North Vietnamese had no limit on service time for their troops, some served for years in these units.

Recommended. I knew about Leo Thorsness, the Weasel pilot who received the Medal of Honor and was a POW, but the stories of Nguyen Xuan Dai and Pham Truong Huy give a perspective of how tough war can be on the participants. The subject of this book was a duel, with both sides having a better than even chance of death or injury at each encounter.

Thanks to Sara Batkie at Osprey Publishing and IPMS USA for the chance to review this book.