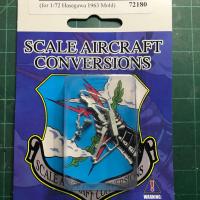 Scale Aircraft Conversions (SAC) is a Texas based company that has been marketing resin and white metal parts for scale model aircraft for over 20 years. They endeavor to be accurate in their moldings, claiming to correct inaccuracies if found. I have bought about a half dozen of their metal landing gear sets in the past, all of which have turned out to be excellent replacements for the plastic kit parts.

The main gear piece has what appears to be curved, protective outer framing that will need to be carefully removed before gluing the gear to the model. This framing protects the thin, secondary (V-patterned) struts attached to the main strut during shipping and handling. I consider the latter to be a benefit as I had a set of SAC metal gear for the Revell/Monogram 1/48-scale B-26B/C Marauder in which one of the main landing gear pieces was bent in its package. Using the kit-supplied piece as a reference, I carefully bent the gear back to the correct shape.

The flexibility of metal landing gear affords an additional bonus. It allows the modeler to make a slight adjustment to equalize the level of the wingtips after construction should that be necessary. You can’t do that with plastic. Metal gear is also better suited if you have a heavy model, such as one with a lot of nose weight to prevent it from being a “tail sitter”.

Based upon experience and the benefits it provides, I can recommend this product.