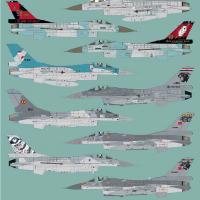 This sheet features markings for some of the more unique and colorful F-16s in use around the world. These decals are sized for the Tamiya series of F-16 kits. There are enough stencils to model two complete F-16s in 1/48. The package includes one 8 ¼ in. x 10 ¼ in. decal sheet, stencil guide, and walkway marking layout. The decal sheet is packed full of decals, some extremely small, but even the smallest are crisp and clear.

Paint & marking guides are provided for the following aircraft:

A brief description and history are provided for each of the aircraft.

This is an extremely well-prepared set of decals for the F-16, and the marking guides and notes provide lots of good information on the aircraft.

Thanks to Speed Hunter Graphics for developing this decal set and to Reid Air Publications for providing the review sample to IPMS.