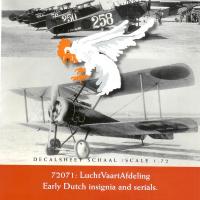 Each decal sheet measures a little less than 6”x8 1/2”. The first sheet has letters, numbers (in a unique font) in both black and white, as well as serial numbers, data plates, and some rooster decals for use on both camouflaged and silver-doped aircraft. The second is entirely covered with the orange ‘meatball’ insignia of the early Dutch Air Force. Different sized roundels are provided, both with and without a white surround.

The instruction sheet is almost a little booklet. Similar to the decal sheets, it measures approximately 6” x 8 ½”, but unfolds to 12” x 16”. The paper is of medium thickness, and has a semi-gloss finish. Upon opening it up, you will find color profiles of a Sopwith Pup, an Se5A, a Bristol F.2B, several Fokker DVII’s and Nieuport 21s, and a DH-9 (note: the DH-9 features a later style of national insignia not on this sheet). Photos of some of the actual machines are also present, along with detailed descriptions of the aircraft (and recommended kits to use). The back of this sheet has several more photos of early Dutch Air Force aircraft for further inspiration.

I really liked the format and the amount of information packed into the instruction sheet. There are enough numbers and insignia on the 2 sheets to make most, if not all, of the aircraft depicted. I think it is a nice touch that there are number combinations grouped to match the subjects of the sheet, as well as full sets of numbers and letters to use for your own subjects. These decals are screen printed, and look thin. There is a constant strip of carrier film across each group of numbers, but this barely extends beyond the edges of the figures. The roundels appear to have minimal carrier film. I have not used Dutch Decals before, but to my eye these look as though they will need a good gloss coat prior to applying. The carrier film doesn’t look as glossy and ‘crisp’ as some of the mainstream decal manufacturers, and I am a bit worried there might be some silvering if you don’t apply them over a very solid gloss coat. I would also point out that the whites on this sheet are (to me) somewhat reminiscent of the old Hasegawa whites – that is, a little toward the ivory side. In 1/72 scale one could argue that this works well as a scale effect, and that a ‘whiter’ white would be too stark. That call is up to the individual.

This is a great little set of some interesting subjects. The instruction sheet is very nicely done, and the decal sheets are packed with useful content. Definitely recommend.

Thanks to Dutch Decals for providing the sample and to IPMS/USA for allowing me to review it.