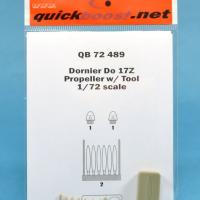 For several years, Quickboost has been known for producing high quality, molded resin replacement parts for many model kits from most manufacturers. The current Airfix kits are produced from new molds, and are exceptionally well molded and nicely detailed on their own. However, with the limitations inherent in the injection molding process, some parts can be improved with resin parts, which can be molded with a greater level of detail and accuracy.

Quickboost now offers a set of resin replacement propellers for the Airfix 1/72 Dornier Do17Z kit. The Dornier Do 17 was a light bomber used by the German Luftwaffe before and during World War II. Designed in the 1930’s, they first saw combat with the Condor Legion in 1937 during the Spanish Civil War. Although it was eventually replaced in frontline service, the aircraft was used throughout the war in a variety of roles.

The kit propellers are typical of modern plastic kits, with two molded three-blade propellers, backing plates and spinners to sandwich the propeller in between, nacelle mounting flange and propeller shaft. The kit parts are designed so that the parts can be painted, then assembled and attached to the nacelles in the final assembly stages. The kit spinners have a tiny amount of flash around the blade openings, and would need to be prepped by removing mold seams and sprue attachments. The kit propellers central hub is rather plain, although this would not be seen on the finished model other than through the blade openings, and the parts would need some clean-up of mold parting lines prior to painting.

The Quickboost resin replacements include two solid resin spinners, six propeller blades, and an alignment tool, which will allow each blade to be positioned at the identical angle of the others. The spinners appear to be slightly longer and more rounded than the kit parts. Although there are no written or illustrated instructions included, most modelers with experience in using resin parts should have no problems. Also, while most Quickboost products are “drop in” replacement parts, it should be noted that these are NOT. The modeler will have to remove the blades from the resin pour stub, and the separate one-piece spinners would have to have pour stub sanded flush with the back plate. The spinners will then have to be center-drilled on the back for the kit propeller shaft, which would allow the use of the kit mounting flange. Or, some other form of alternative pin/flange would have to be devised for mounting the propellers.

With their outstanding quality and detail, there is no doubt that the Quickboost 1/72 Dornier Do17Z Propeller w/Tool would add to the appearance of the finished model, and once painted, would likely increase the accuracy and authenticity. Additionally, these engines would likely work just as well for both the current release Airfix 1/72 Dornier Do17Z kit #A05010, they could also be used for the model in the upcoming release of the Airfix 1/72 Boulton Paul Defiant Mk.1 & Dornier Do17Z Dogfight Doubles Gift Set #A50170.

Considering the relative complexity of installation, these parts are probably best suited to experienced modelers who have used resin replacement parts. Novice modelers might like to give these a try while upgrading their skills, and should be able to use the products with little to no problem. Based on the quality and appearance, I would have to say the Do17Z Propeller w/Tool is Highly Recommended.

Thank you to Aires and Quickboost for supplying this review sample.

Comparison to kit part
Previous Next