Dornier Do17 Units of World War 2 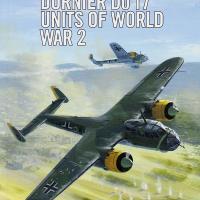 The good folks at Osprey Publishing just keep cranking out quality publications on all sorts of subjects, and this book is no exception. Author Chris Goss takes us through a well-written and well-researched history of the units that operated the Dornier Do-17 bomber in World War II.

The book starts with a short explanation of the development of the Do-17 from a transport plane into a military plane during the formative years of the Luftwaffe. The type served in the Spanish Civil War, like many of the early Luftwaffe aircraft, and proved to be a capable bomber. Lessons learned in Spain led to the redesign of the forward part of the fuselage into the version that most of us modelers are familiar with – the Do-17Z.

The Do-17 served in Poland, France, and the Battle of Britain, but was soon realized to be inferior to the He-111 and Ju-88, so it was increasingly relegated to reconnaissance and night bombing missions. The type incurred heavy losses at the hands of more modern fighters such as the Hurricane and Spitfire, and those losses are detailed in the book. I found it very impressive that the author was able to pull together so much information about the missions flown and the crews involved. There are several accounts taken from reports of both Luftwaffe and Allied pilots.

The Do-17 was all but phased out by late 1942, although many still functioned as trainers. Sadly, none survived the war intact, but in 2008 one was discovered off the English coast and was eventually lifted from 52 feet of water in 2013. It is easily identified as a Do-17 and is currently housed at the RAF Museum Cosford.

This book is highly recommended to anybody interested in the Dornier Do-17, and certainly has started me thinking about starting that Classic Airframes kit that has been sitting in my stash for so long. Many thanks to Osprey for giving me the opportunity to read and review this terrific book.