The Doolittle Raid, Images of Aviation 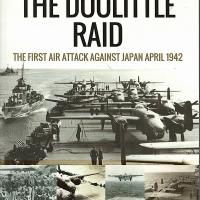 On 1 April 1942, less than four months after the world had been stunned by the attack upon Pearl Harbor, sixteen US aircraft took to the skies to exact retribution. Their objective was not merely to attack Japan, but to bomb its capital. The raid was more successful in its moral impact on shaking the Japanese sense of invulnerability than in its physical damage to the targets. The Doolittle Raid tells the story of the preparations for the raid, descriptions of each of the 16 crews and their outcome, and the aftermath of the raid.

The book is part of Pen & Sword’s Images of Aviation Series and is profusely illustrated with quality B&W photos. The photos create vivid images of the men, aircraft, and ships involved in the raid. Each crew and member of the Raiders is described in text and photos to personalize the people involved. The text provides introductions to each phase of the operation, and captions clearly describe each of the photos.

Part I - Striking Back

The Doolittle Raid provides an intimate connection to the men who volunteered and dedicated themselves to this important mission. The raid lifted the spirit of Americans who had previously only experienced defeat and struck a blow to the moral of the Japanese people. The book tells a compelling story of the heroic actions taking by the volunteer Raiders and how the raid started to turn the tide of the war in America’s favor. The text is well written and an easy read. The numerous photos are clear and very descriptive of the men, planes, and ships taking part in the raid. Detailed statistics are included for the 16 aircraft in the raid.

This book is an excellent narrative and fascinating collection of photos on the remarkable actions of the Doolittle Raiders. Thanks to Pen & Sword for publishing this awesome book, and thanks to Casemate for providing a review sample to IPMS.