The Danish Army of the Napoleonic Wars 1801-1814 Volume 2: Cavalry and Artillery 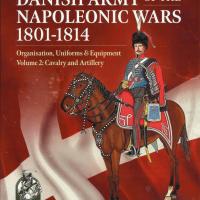 As a figure modeler for roughly half a century, I’d like to think I know a wee bit about the Napoleonic Wars. And yet, up until recently I really had no idea that the Danes were much involved in that series of scuffles until I sat down with this little volume. Although the author David Wilson doesn’t dwell a great deal on Denmark’s direct involvement, apparently Denmark joined sides with Napoleon when the British attacked the Danish fleet in Copenhagen’s harbor in 1801 and then the city itself in 1807. Napoleon’s eventual defeat also led to the disintegration of the Denmark-Norwegian union and the end to almost a century of peace in the region.

What Mr. Wilson does provide, however, is a detailed look at Danish regimental histories and equipment, along with generous full-page color guides displaying the bewildering range of uniforms worn during the period. The bibliography provided at the end of this volume speaks to meticulous research into all aspects of the military of that time. This, the second volume in the series by Wilson, focusses exclusively on Danish cavalry and artillery – the first volume being on the infantry. Believe me; the information provided requires the full 150 pages. No detail of the equipage seems to have been left out, and there are pages of saddles, pistols, swords, rifles, helmets, flags and artillery pieces in full color to whet the modeler’s appetite.

If I have any niggles (and it’s a small one) it’s that Mr. Wilson’s skill set does not seem to include the drawing of human figures. What are shown in the book appear somewhat stunted and compressed to my eye. That being said, the uniform details are still impeccable and his handling of the equipment drawings is without peer. In any case, this is a fascinating book for the figure modeler and just packed with useful information on a lesser-known belligerent of this important series of 17th century conflicts. I can recommend this book without any reservations whatsoever.

My thanks to Casemate for importing this delightful book and to IPMS/USA for a chance to catch up on my Napoleonic history. Stay safe, everyone, and happy modeling!