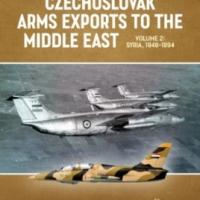 The book is volume 34 of Helion & Company’s Middle East @ War series and, as noted in the title, is the second volume of its coverage of Czechoslovak Arms Exports to the Middle East focusing on arms exports to Syria between 1948 and 1989.

Starting in the mid-1950’s and continuing up to the collapse of the Eastern Bloc in 1989, Syria was one of the prime customers of the Czech arm industries, particularly as successive coups resulting in Syrian politics becoming dominated by leftists and communists over the years. Initial deliveries were Panzer IV’s and StuG III’s manufactured or overhauled in Czechoslovakian factories, but as Soviet influence grew in Syria, Syrian began requesting more modern equipment or equipment of Soviet origin and in ever increasing quantities, often playing the Soviet Union against Czechoslovakia to see who they could get the better deal from.

Unfortunately, from the beginning of the relationship between the two countries, the weak state of the Syrian economy often meant that regardless of how generous the financing terms were, Syria had a hard time paying for the equipment that was delivered resulting the buildup of a significant debt being owed to Czech arms manufacturers.

Despite the growing debt issue, the Syrian military kept pressing Czechoslovakia to provide more and more advanced weapons to try and keep pace with its neighbor and bitter enemy, Israel. The Czechs agreed to provide more advanced weapons over the years but often discovered that many of the Syrian troops and maintainers lacked even the most basic training on how to use and maintain the weapons, resulting in Czechoslovakia having to repeatedly send training missions and instructors to Syria for extended periods of time to get the weapons operational and to train the Syrian armed forces. It also ran a number of schools and training centers in Czechoslovakia itself to train people from Syria and other countries.

I enjoyed the book and found the story behind Czech arms deliveries very interesting and informative. The charts explaining the various arms sales to Syria over the years are very detailed, but well presented.