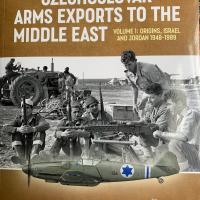 The book is volume 39 of Helion & Company’s Middle East @ War series and, as noted in the title, is the first volume of its coverage of Czechoslovak Arms Exports to the Middle East. It examines the re-birth of the Czechoslovakian arms production business in the aftermath of World War II and Czechoslovakia’s first attempts to find a market for its products

Even prior to World War II, Czechoslovakia had a long tradition of weapons manufacturing stretching back to the late 1800’s. During the German occupation in World War II, Czechoslovakia factories made arms for Germany and her allies. This did not go unnoticed by the Allies and several heavy bombing raids in 1944 and 1945 destroyed a number of the larger weapons producing factories. However, as Czechoslovakia avoided the main combat operations of the war, when the war ended it retained a large portion of its industrial capacity and was in a good position to restart its economy. As a number of different German weapons had been either developed or produced in Czech factories during World War II, the country was well placed to continue production of many of these weapons, it just had to find customers to sell them to. Unfortunately, the new Czech government lacked funds to use the capacity of its factories, so through the end of the 1940’s Czechoslovakia, like many other European countries operated a mix of World War II hardware.

This volume looks at the efforts of the Czech government, both before and after the communist takeover of the government in 1948, to find customers for the weapons it produced. While the title lists only Israel and Jordan, it actually discusses proposed and completed sales throughout the Middle East, other than Syria and Egypt which are covered in separate chapters.

Initially, Czech factories continued the production of the same German weapons systems as they had been producing at the end of World War II such as the Jagdpanzer 38(t) Hetzer, StuG. III Ausf. G’s, Bf-109G/K and the Me 262, often by completing partially completed ones or upgrading and modifying existing ones. After the communist revolution, Czechoslovakia shifted production to Soviet designs such as the T-54/55 and T-72 series of tanks and the MiG-15 and MiG-21 aircraft. It also developed several indigenous designs such as the L-29 and L-39 trainer aircraft.

After the communist revolution, Moscow’s instructions were to limit customers to countries that either had already become communist nations or that Moscow believed were leaning in that direction. The book includes numerous tables discussing arms orders or sales to many of the countries in the Middle East that were emerging from the control of the colonial powers, which Moscow hoped could be converted to communism, such as Lebanon, Kuwait, Qatar and Saudi Arabia.

Even before the communist revolution in Czechoslovakia’s Jewish independence organizations were actively buying Czechoslovakian weapons. Once the independent State of Israel was created in 1948, sales picked up with Israel purchasing aircraft and other weapons such as the S-199 fighter (Bf 109G/K’s with a radial Jumo engine instead of the standard inline engine) as well as surplus Spitfires, numerous small arms and artillery pieces. Many of these weapons were used very successfully by Israeli forces in combat with its neighbors in the late 1940s.

However, as the communist party was never able to achieve a real foothold in Israeli politics, over the years it became clear to Moscow that Israel was not going to become a communist country, so it dictated that weapons sales to Israel were to cease and focus was to shift to its opponents.

The book is a very interesting examination of the history of Czechoslovakia’s efforts to rebuild its industrial base and resume its role as a weapons manufacturer in the aftermath of World War II. There is a lot of information about what countries in the Middle East bought weapons from Czechoslovakia and quite a few black and white photographs of the manufacturing plants and the weapons produced. There are 9 color side views mostly of tanks and other mechanized equipment captured by Israel and re-purposed, along with the Israeli S.199 and Spitfire LF.Mk IXE and one of the Douglas C-54 transports that were used to airlift weapons to Israel.

I enjoyed the book and found the background on the Czech arms industry very interesting and informative. The information on weapons sales to the various countries is very detailed, but well presented.