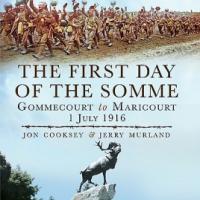 Perhaps no other battle of World War I holds the stature of the Battle of the Somme. Contested from 1 July and 18 November 1916 by eleven divisions of the British 4th Army, and six divisions of the French 6th army against the German 2nd Army commanded by General Fritz von Below. The Somme was bitterly fought with over 1 million casualties on both sides making it one of the bloodiest battles in history. Technology was again rapidity advancing at a war time pace and saw the first appearance of tanks on the battlefield to break the stalemate of trench warfare. It was war in all its ugliest. Today, 100 years to the day the scars of battle are still visible. The draw to relatives, those interested in history, or tourists to this ground.

As the book’s title makes clear, this is a battlefield guide for the first day’s battle focusing on British activities. Told over the course of 229 pages, this soft cover guide is quite comprehensive in guiding a person over the battle field. All pictures and maps are in black and white and are clear and informative.

The first 20 pages include a brief introduction, a section on visiting military cemeteries in the area follows. The nuts and bolts of how the British established cemeteries for their dead locally is briefly explained. In addition to being a solemn place to honor their dead, the British passion for gardening can be seen in the very formal nature of the British cemeteries. In some cases, the cemeteries are almost exactly where the casualties occurred. Gommecourt British Cemetery #2 is sited in an area that was in No Man’s Land between the two lines. The remains buried here weren’t recovered for nearly eight months until after the Germans pulled back to the Hindenburg Line in February 1917. Then these men were buried close to where they were found.

The next two sections place the battle in historical context, and finally local information regarding a visit to the area. Local restaurants, inns and other points of interest are listed. If one is contemplating a trip to France to visit the Battle of the Somme site, I’m going with the assumption that this person has already performed a huge amount for research into the current prospects for food and lodging. I’ll leave any thoughts on actual places to someone more knowledgeable than I in the local flavors!! An interesting bit of information is included in this section, and that is a cross reference guide to German verses British Rank structure. I found this handy!!

The remainder of the book is set up in chapters that lay out a distinct battlefield tour, called Routes in the book. There are eleven Routes laid out. They range in length from Route 9 Fricourt at 1.5 miles to the longest, Route 2 Gommecourt (Spine Route) at 5,3 miles. All relatively short in distance. Each Route has symbols which indicated whether a route is suitable for walking, biking or auto touring. GPS coordinates are given for the starting point of each route, and a grading system is used to denote how strenuous each route is. A general description and context starts each route section.

Information on what will be found along the route is comprehensive. Information regarding cemeteries includes some of the more notable residents and their exploits with pictures helps put a face on a name. Many of the photos in the book are as the area appears today. The one noticeable thing missing from the pictures is the modern sprawl we see in and around our own hallowed ground here in the US. In one respect, this ground is very much like our own Gettysburg, Shiloh, or Antietam in that there are unit markers that show where units were during the battle.

Appendix 1 in the rear of the book tells of where the recipients of the Victorian Cross are buried. It mentions that 58 soldiers were awarded this award for actions during the Battle of the Somme, only eight were awarded for actions on the first day, and six of them are interned on the battlefield. It is these six that are listed. Appendix lists 12 men known as Soldier Poets. I never heard of any of them, which isn’t surprising!! A section on further reading, and an index complete the book.

I’ve used a host of Battlefield Guides during my many trips to Civil War battlefields. This guide ranks right up there with some of the best I’ve seen. There’s plenty of information within it’s pages to help make a visit to the Somme quite detailed. With all the “as is now” photos it will be easy to pick out important land marks as they look today. Things change, especially over one hundred years!! I enjoyed how the authors presented each section with historical context, units that participated in action in the area one is in, and some of the notable figures that were involved. The text is well written, and matches with the pictures perfectly. I like this book a great deal, and would be an essential piece to my travel kit when going over there!! Even if I never make a trip to the battlefield, this book will be a good jump off point to further my interest in WWI in general, and this battle in particular.

I would recommend it to anyone interested in the War to end all wars or anyone traveling to visit the field over there.

I wish to thank Casement Publishers, and IPMS/USA for providing this sample for review.