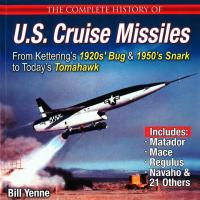 Bill Yenne has written more than three-dozen books on historical topics, as well as several novels. He has contributed to encyclopedias of both world wars, and has been featured in documentaries on the History Channel, the National Geographic Channel, the Smithsonian Channel, and ARD German Television. The Wall Street Journal notes that Yenne writes "with a cinematic vividness," and Gen. Wesley Clark, former Supreme Allied Commander in Europe, called Yenne's recent biography of Alexander the Great, the "best yet." Yenne's books have been included in Amazon's "100 Best Books of the Year."

Specialty Press' latest book is a square back soft cover including 204 gloss paper pages. The front cover features a color photograph of a Chance Vought Regulus II launching from Edwards Air Force Base. The rear cover features color photographs a Bell GAM-63 Rascal by a Boeing YDB-47E Stratojet in 1951; a Martin TM-67B Mace launching from Patrick Air Force Base in 1961; and a Douglas XGAM-87A Skybolt resting on its service dolly next to a B-52 Stratofortress. I counted 72 black and white pictures, 164 color photographs, 24 color illustrations, and one table.

Bill Yenne’s latest tome coincides with the Centennial of US Cruise Missiles. Colonel Henry Harley “Hap” Arnold was sent overseas to France to prepare for the operational deployment of vast clouds of unmanned Kettering Bugs to be used against the German Army in 1918, but the concept locked away with the end of WWI. Bill continues with the origins of cruise missiles beginning with some of the early adventures into this realm with the 1917 Curtiss-Sperry Flying Bomb, the Kettering Bug, and the German V-1 “Buzz Bomb”. The end of World War II led to many imitations of the point-and-shoot V-1 cruise missile, but eventually brighter minds brought better guidance systems into play. This led to the inter-service rivalries between the Air Force and the Navy with their Matador versus Regulus developments in the 1950s. Bill Yenne covers the early development of strategic intercontinental cruise missiles in chapter 4, focusing on the development of the Navaho and the Snark. Next up are the air-launched cruise missiles in the form of the Rascal and the Hound Dog (Don’t you just love the naming conventions?). The Hound Dog was such a success, that it would be nearly two decades before the development of the next generation of cruise missiles, the ALCM, became a priority. Chapter 7 introduces the Tomahawk, a cruise missile that has been operational for the last four decades. Bill wraps up the book with a discussion of the introduction of stealth technology in Chapter 12, along with coverage of the hypersonic cruise missiles. The contents include:

I really appreciated the structure that Bill Yenne utilized, starting with the early development of the cruise missile to the current Tomahawk platform. I especially enjoyed the section on the Snark’s development and was quite impressed with the detailed development of the Tomahawk. Bill Yenne provides a very readable text that is well supplemented with previously un-published photographs and illustrations. There are plenty of technical details to accompany the sharp, clear photographs and illustrations. If you want the history of US cruise missiles in one book, this is the reference you need.