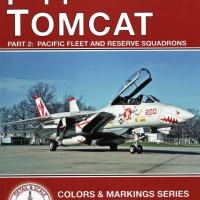 “The Grumman F-14 Tomcat was one of the most iconic naval fighter aircraft of the latter half of the twentieth century. Colors & Markings of the F-14 Tomcat, Part 2: Pacific Fleet and Reserve Squadrons is a comprehensive look at the paint schemes and unit markings used by operational F-14 squadrons assigned to the Pacific Fleet from 1972 through 2004.

The book covers the fifteen active Pacific Fleet fighter squadrons and the two Naval Reserve units that flew the Tomcat for over thirty years. Beginning in 1972 when the F-14 entered service with VF-124 “Gunfighters,” the Tomcat distinguished itself, first as an outstanding fighter and fleet defense aircraft, and later as a strike aircraft.

This book follows the first book in the trilogy, Colors & Markings of the F-14 Tomcat, Part 1: Atlantic Fleet and Reserve Squadrons, which covers the fifteen active Atlantic Fleet fighter squadrons and the two Naval Reserve units that flew the Tomcat while assigned to the Atlantic Fleet. The third and final book in the series, Colors & Markings of the F-14 Tomcat, Part 3: Prototypes, Test, Evaluation, and Adversary Aircraft, will follow and it will cover the Grumman prototypes, the test and evaluation squadrons, and the facilities that flew the Tomcat. Also included will be Tomcats that flew in the ACM adversary role and those flown by NASA. Part 3 will also include an appendix that covers the official paint schemes used on Navy Tomcats during there (sic) operational service, and an additional appendix that will go into considerable detail to illustrate the markings and standard stenciling used on the F-14.

Each of the seventeen fighter squadrons are covered by a short history of their years flying the Tomcat, including both operational highlights and a good look at the squadron markings with which each unit adorned their aircraft. How those markings evolved over time as the Navy moved from the Light Gull Gray over Insignia White paint scheme, to the overall Light Gull Gray scheme, and finally to the group of very low visibility exteriors that were classified as tactical schemes is illustrated for each squadron with color photographs and art profiles.

The move from the gray over white scheme, which featured some of the most colorful aircraft markings ever displayed on U. S. Navy aircraft, to the lower visibility schemes led to a much more drab and understated look for the F-14. Yet even throughout the latter stages of its career, special aircraft in each unit, including the X00-coded Tomcat assigned to the Carrier Air Wing Commander (CAG) or the X01-coded aircraft assigned to the squadron commander (CO), allowed the display of colorful squadron markings to continue. Each unit section has a selection of photographs that chronicle the unit marking evolution throughout the years it flew the F-14.”

This is another ‘have to have’ book from Bert Kinzey. I now have over 28 of Bert’s books, going back to number 1 and including two original Colors & Markings books on the F-14 Tomcat (C&M Vol’s 2 & 8). Those early books included only 64 pages each, with about half in black and white and color and notes about the aircraft color schemes in 1984 and 1987 respectively. This latest book is 125 pages and includes nothing but color photographs and line drawings by Rock Roszak. This is a must have for those of us attempting to document west coast active duty and reserve squadrons, including the mythical ‘VFA-213’ markings from the movie Top Gun and several color images of the seldom seen bicentennial markings from VF-124.

My review in this instance was even more interesting as I was asked to review both the print and digital version of these two publications. While often am looking at the images in the printed book (with 125 pages) there is another advantage with the digital version (which is 211 pages, due as far as I can tell because some of the images in the digital version with are limited to only one or two images per page—I couldn’t find any differences in the descriptive text). I enjoyed the ability to download the individual images in the digital version which in turn permits me to make any number of enlargements or adjustments in such applications as Lightroom, Photoshop or Luminar AI. This is a great opportunity for amateurish photographers like me and those who are more interested in having books like these in digital format and viewable on their many different mobile devices. While I sense the growing environmental, printing and size advantage of having such valuable references in one’s hand or phone, I love owning looking at printed page (as my library and wife will sadly mention).

One of the more interesting aspects are the author’s notes includes their historical comments about the squadron’s earlier aircraft and markings, including the history behind the ‘Langley stripe’ and why and how some of the squadron’s special markings came about.

Also worth noting: many of the photographs and details about specific markings are not written with modelers and scale models mentioned, they are clearly included in this book. While there appear to a be never ending number of the F-14 models produced, the recent release of the Tamiya F-14A is an indication of potentially more to come, even though beautiful naval aircraft have been gone from the fleet for generation now. This book provides a treasure trove of beautiful color photographs which will probably drive some modelers crazy or to drink….or both!

This book should not be confused with Colors & Markings Series Digital Volume 3. This book is much more detailed and is a whopping 442 pages in length. It covers much of what I suspect will be covered in Colors & Markings of the F-14 Tomcat, Part 3: Prototypes, Test, Evaluation, and Adversary Aircraft.

I have also attached several JPG images to help illustrate some of the great illustrations and photos found throughout this book.

My thanks for this review book to Detail & Scale Publications and IPMS/USA for my opportunity to review, read and thoroughly enjoy this book and the digital versions. I thoroughly recommend this book for all scale modelers as well as those interested in modern jets, specifically the F-14 and their markings and modelers of all ages.