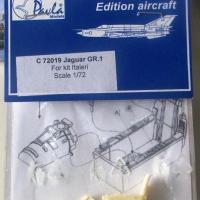 The cockpit set comes in four cream colored pieces – tub, seat, stick and panel/coaming. The parts are nicely detailed and well-cast, if only a tad rough on the surface. The texture was not an issue with parts this small and I did nothing special to prepare the parts for painting, including skipping the washing stage often recommended. The parts were prepared simply by cutting them from their casting blocks.

This set is intended for the Italeri kit, but I prefer the Hasegawa kit and adapted the set for use in it instead. Given the simplicity of the set, I would imagine that using it in either kit is a fairly similar proposition. The Hasegawa kit does incorporate the nose gear well into the bottom of the cockpit tub so it had to be sawed off and incorporated into the conversion. Care must be taken to ensure the nose gear is centered when the parts are glued together and a bit of surgery is required to remove the instrument coaming and some of the plastic forming the rear bulkhead on the kit parts, but fitting the cockpit set was a fairly basic procedure. In the end it fit into the Hasegawa model just fine.

I painted the parts with Tamiya acrylics and picked out the details with India ink. An oil wash and some dry brushing brought out the cast details nicely. Overall, this is a nicely detailed upgrade scoring a three on my one to ten difficulty meter as far as working with it goes. Thanks to Pavla and IPMS USA for the sample.