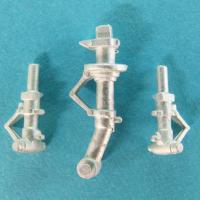 Scale Aircraft Conversions has released a set of white-metal front and rear main gear for the Academy CH-46 in 1/48 scale. The set includes three parts, a front gear strut and two main rear struts. These three parts are direct replacements for kit parts A-18, B20(r), and B21(l).

There are two deficiencies in the kit gear that are alleviated by the SAC replacements. First my kit gear had a pin hole in one of the rear supports with significant shrinkage around it. The kit front gear had a large pin ejector mark prominently in the middle of the piece. Replacing with the SAC gear eliminated having to deal with these issues.

The SAC landing gear are easily prepared using an X-Acto knife, pin file, and flex file. After cleaning and sanding my replacement gear, I mounted them to sprue using super glue and primed them using Tamiya Fine Surface Primer for Plastic and Metal (White). Next, they were sprayed Tamiya X-2 Gloss White and allowed to dry in the dehydrator for an hour and then detail painted using Model Master Chrome Silver. Once fully dry, about four hours in the dehydrator, they were airbrushed with Testors Clear Lacquer to facilitate weathering. Relief details were drawn out using AK enamel wash for interiors.

I feel the SAC gear are a perfect replacement for the kit gear and are very easy to work with. Thanks to Ross MacMillan and Scale Aircraft Conversions for the chance to review the landing gear and to the support staff of the IPMS/USA Reviewers’ Corps.