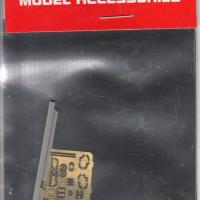 I recently built and reviewed Brengun’s USN Tow Tractor (BRL 144025) used on aircraft carriers. One thing that I said was missing was the tow bar to allow the tractor to move the planes around the deck. So here it is.

The entire kit is a single resin cast and a single PE fret. The resin parts are the bars for the tow bar. The PE is the connectors to hook the assembly to the tractor at one end and the aircraft at the other.

The assembly is both easy and difficult. The easy part is that there aren’t a lot of parts, and they are logically set up. The difficult part is that the PE parts are all very small and easy to lose. One way I overcome this difficulty is using a jeweler’s apron, which anchors to my workbench at one end, and the other end has a loop which is around my neck. This way if I drop a part, it usually falls into the apron, where it can be recovered. The carpet monster is bereft.

I cut the two bars from the resin casting block, using a fine saw blade mounted in a hobby knife handle. After the cutting, I lightly sanded the attachment sprue flat. Number 500 sandpaper is plenty coarse for this job.

I then cut the PE parts for one of the attachments for the aircraft end of the tow bar.

The part which attaches to the end of the tow bar has to be folded into a box with the ends open. The PE was marked with fold lines. These also made it easier to get a clean and straight fold. The first 3 folds were pretty good, but the fourth was more difficult as I didn’t have a tool which was small enough to fit inside the part while I folded the fourth side. I finally wound up using jeweler’s pliers to “brute force” the fourth side.

The resin tow bar part had to be sanded down to fit inside the end piece. When this was fitted, I used CA to hold the parts together. There is also a small wheel which goes under the end piece and a connector which fits over the axles on the aircraft.

Once one side was done, I did the same procedure with the other side of the tow bar. Second time was easier, as I had some experience now, and some better idea of how to manage these tiny parts.

The two tow bar parts meet at a single point with the O shaped connector which hooks to the rear of the tractor. These parts went together fairly easily, and the two bars then were glued into the connector.

Painting was accomplished fairly easily. Older tow bars were painted yellow with red ends for high visibility, which was a safety factor. Now these are painted white, although the ends are still red. The same for the tow tractors, which used to be yellow, but are now painted white. So paint the tow bar to match your tractor.

Since I already had a yellow tractor, I painted the resin parts yellow and the PE red. This gave me the yellow tow bar with red ends.

There is enough flex in the resin parts to allow almost any carrier based aircraft to be hooked up to the tractor.

Overall Evaluation –Recommended if you’re interested in a carrier deck vignette or diorama with a towed aircraft.

Many thanks to Brengun for this kit, and to IPMS USA for the chance to build and review it.

Towbar and tractor towing A-6

Towbar and tractor towing A-6
Previous Next