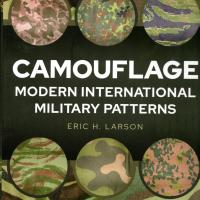 “A comprehensive, accurate, and academically-supported reference of all of the major military and paramilitary camouflage patterns that have been in use around the world from the end of World War Two to today. This book will be a one-stop, generalized reference illustrating as many patterns as have been researched into the present time period. It will surpass all previous efforts. In addition to color tiles illustrating camouflage patterns it will include photographs of the designs actually being worn by military and paramilitary personnel, something few other references have done in suitable combination.”

Initially, I have never seen so many camouflage designs and patterns in my life—really WOW best describes my immediate impressions from this book.  There are 482 separate countries or political groups set out in this tome.  Mr. Larson uses over 600 color images alone to illustrate the multitude of various camouflage patterns in use throughout the world.

This book is basically organized using the major geographic regions or continents of the world (and then within these broad areas, the specific political areas, and nationalities), including:

I of course looked to see several of the countries which are of the greatest of interest to me, including the United States, Canada, the United Kingdom, Germany, East Germany, Switzerland, and the Ukraine.  I also admit that I found the timelines, as to what constitutes ‘modern’ patterns.  However, I soon became overwhelmed at the breath of the author’s undertakings in this book.

He begins with a brief history of the uniform camouflages and describes his methodology followed in this book.  What follows is a very interesting description of some of the major political issues facing our world today including those related to the Ukraine and Russia.

Thanks to Casemate for the review copy. You can receive your copy by contacting them at http://www.casematepublishing.com/.  Let them know you read about it here at IPMS/USA.

My thanks for this review book to Casemate Publications, Pen & Sword, and IPMS/USA for my opportunity to read and review this well documented book.  I thoroughly recommend this book for scale modelers as well as those interested in the history of the camouflage uniforms and especially for those interested in the numerous camouflage patterns from around the world.  I know of no other such documentation that even attempts to approach this subject—especially using color images.