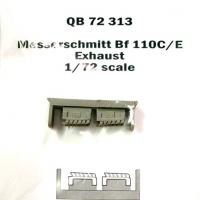 The Bf 110 served with success in the early campaigns, the Polish, Norwegian and Battle of France. The Bf 110's lack of agility in the air was its primary weakness. This flaw was exposed during the Battle of Britain, when some Bf 110-equipped units were withdrawn from the battle after very heavy losses and redeployed as night fighters, a role to which the aircraft was well suited.

Quickboost has some of the best resin parts I have seen. For a 1/72 scale part the edges are sharp and the details are clearly defined. This will be a nice upgrade to the Airfix kit.

I would like to thank Quickboost.net, Aires Hobby Models and IPMS/USA for the opportunity to conduct this review.