The Best of After The Battle Then And Now 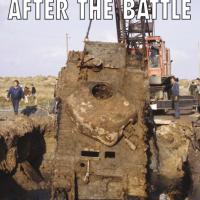 Since we launched our first edition in August 1973, After the Battle has traveled around the globe and has covered hundreds of battles — over 750 at the last count – and taken thousands of photographs, covering major operations down to individual exploits. Selecting a cross-section of just a few from the stories that we have covered has not been easy, but we hope that you will find some of your favourites within the pages of this volume, covering the Best of After the Battle.”

As I initially opened this After the Battle (ATB) book, I have been quickly very pleased by both the contents and the material subjects covered in this very large and substantial book. Even if you only read the image captions, there are several weeks’ worth of reading ahead of you. This should clearly be a ‘10’ on your book reading list. I have approximately 90 of the single ATB paperback editions and two of the larger bound books and rely on them for much of my WW II history. Though the ATB website is missing several of it’s links now, you can look over their index of issues and still find of them to be available today: https://afterthebattle.com

The coverage provides summaries of over 30 significant combat engagements. As you will hopefully see from the several scanned images (from the book), Winston Ramsey uses his keen editorial ability to survey from the existing 180 issues of After the Battle (ATB) issues and choose some of the most interesting stories to include in this volume. He does so in a style that epitomizes the ATB publications: then and now comparisons using period photographs taken mostly during and or right after the actual combat and comparing them with mostly contemporaries color images. This book also relies on many sketches and both color and black & white maps, illustrating movements, combat actions, grave sites, and photographic documents.

Some of the most detailed are those covering Karel Margry’s article covering the Task Force Baum’s Hammelburg controversial Raid of March, 1945 to free General Patton’s son-in-law, the Stalag Luft 3 and the real Great Escape (which has-become a film classic from 1963 with Steve McQueen, James Garner, Richard Attenborough and many other well know actors), the recovery of the Lady Be Good, the Japanese 1945 surrender aboard the USS Missouri, the capture of Pegasus Bridge, Michael Wittmann’s last battle, Who Downed Douglas Bader?, Roger Morgan’s article about the Man Who Never Was (which is still a fascinating story after 80 years),’ and the suicide of Heinrich Himmler.

I certainly highly recommend this outstanding book to anyone interested in learning about many of the interesting facets of World War II. Reading the stories in this collection of ‘The Best’ will carry you into some of the most interesting and compelling military campaigns of the war.

I really appreciate the opportunity to review this book and thank Casemate Publishers and IPMS-USA. Please let the publisher know that you are reading this book because of your membership in IPMS-USA.