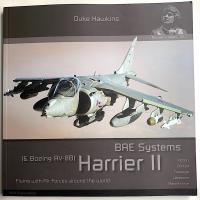 This is another of the fantastic new books published in the Duke Hawkins Books series. This volume is number 11 of the series and focuses on the Harrier II/AV-8B as operated by the RAF, the United States Marine Corps, the Spanish Navy, and the Italian Navy. The volume includes at least one photograph of a jet from each country. Apparently, the authors considered just doing a book on the RAF versions, but in the end decided to do an expanded book covering all versions of the Harrier II.

The AV-8B/Harrier II has its origins in a USMC requirement for a replacement for the AV-8A Harrier. McDonnell Douglas designed and proposed a much upgraded and improved Harrier, resulting in the AV-8B Harrier II. Different variants were developed to meet the requirements of the RAF and the USMC resulting in the Harrier GR.7, GR.7A, GR.9 (and associated trainers T.10 and the T.12), AV-8B, AV-8B Night Attack, and the Harrier II Plus (and the TAV-8B) for the USMC.

The book starts with an examination of the RAF variants, followed by those of the US Marines, Spain and Italy. Each section is chocked full of photographs, many of which are detail shots of specific parts of the jet. The photographs are outstanding – crisp and clear. Each photograph is accompanied by a detailed caption. In many cases the captions are used to discuss differences between the different versions, for example there are photographs of both the Martin Baker MK.12 ejection seat installed in the RAF Harrier IIS and the SJU-4 ejection seat installed in the American built Harrier IIs, both in the aircraft and outside of the aircraft.

For modelers, the photographs cover just about every part of the jet and include many detail photographs of the different instrument panels arrangements, the cockpit (with and without the ejection seat), open panels, both types of nozzles, and the landing gear – giving anyone who wants to add detail to their model a lot of great information. There is also a series of photographs of Harrier II’s undergoing maintenance, including a series showing the removal of the engine (the entire wing must be removed first) that would make an interesting diorama.

This is an outstanding book and a must for anyone itching to detail up an AV-8B/Harrier II and I highly recommend it.

Thank you to HMH Publications for this excellent book and to Casemate Publishing for providing the review sample.