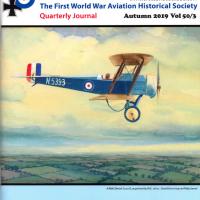 The latest journal of Cross & Cockade International - Autumn 2019, features a front cover painting by W.E. Johns of a RNAS Bristol Scout D. W.E. Johns also contributes the back cover painting of a Bristol M1C flying high over the checkered landscape.

Norman L.R. Franks kicks off this issue with a nice 4-page highlight of Captain Arthur Treloar Whealy. Included are eleven family photographs of this well-known fighter pilot. Bernard de Broglio follows with an investigation into an eBay photograph of a Bristol Scout D crash surrounded by Ottoman soldiers in “Air Fighting at the Dardanelles”. This eleven-page feature includes fifteen photographs, a detailed map, and a page and a half of sources and notes.

Andy Thomas is up next with a transcript by Wing Commander R. Hollingsworth and his experiences in the No. 5 Squadron RFC from 1913 to 1915. This sixteen-page article includes 26 period photographs and a map showing locations of RFC Aerodromes near Paris. Most first person RFC recollections from this era are from an officer’s point of view. Here we get a quite interesting perspective from Hollingsworth who joined the RFC as non-commissioned air mechanic.

Ian Burns authors an expansion to a biography of Eliot Millar King with a detailed look into King’s logbook. Spanning, 22-pages, Ian Burns’ has utilized King’s RNAS Pilot’s Flying Log Book as a view into King’s RNAS service, supplemented with other sources to flesh out this story. Ian Burns utilizes 49 photographs and three maps to assist in telling this tale.

“C8, Somebody’s Pet Camel” is a collection of six photographs of a white Sopwith Camel. The inside rear cover features four more photographs of white Sopwith Camels. Mike O’Connor and Ray Vann offer up Part 2 of their feature on 26 Sqn RFC in East Africa. This ten-page feature includes eighteen period photographs and 3 maps. Paul R. Hare focuses in on a single airframe with “The Brief Career and Tragic Fate of BE2a 331. Nine black and white photographs and a map fill this four-page article on the short three-week service of BE2a 331 that ended with a fatal crash. David Marritt chimes in with a 2-pager titled “City of Hull – History of an I.A.F. Aeroplane” with five photographs. David was intrigued with a framed flag in his company’s offices and proceeded to dig into what it represented. In this case, the City of Hull Chamber of Commerce funded a Sopwith Camel to the Imperial Air Fleet.

Mick Davis’ Logbook department features a drawing of the machine gun emplacements at Oreq aerodrome to defend against Allied aircraft. This includes a side sectional view as well as a top view. Joe Moran continues with his Modeling feature. This month he focuses on SRAM’s 1/144 SIA 7-B, a resin kit with a full build review. The Bookshelf section is a review of WWI aviation specific books and magazines with this issue totaling fourteen.

This is another excellent issue from Cross & Cockade and I continue to be impressed with the quality of the articles, both from a research perspective and readability. The period pictures, maps, and drawings in this journal come off looking great thanks to their printing on the journal's glossy paper. If you are into early / WWI aviation; this journal is an incredible source of information that will have you on the edge of your seat for the next issue. My thanks to Cross & Cockade International and IPMS/USA for the chance to review this great issue.