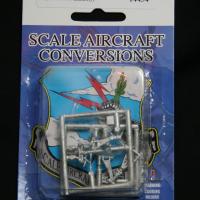 Scale Aircraft Conversions (SAC) manufactures white metal landing gear that is a direct replacement for the kits plastic landing gear. The metal landing gear offer greater strength over the kit parts as well as having most of the mold lines removed. At times, the metal will be bent out of shape but that is easily corrected by bending it back to the correct shape.

This set includes six parts, the two main gear assemblies, bracing arms for the main gear and nose gear with separate bracing arm. All the parts are exact copies of the kit parts with a small amount of mold lines or “flash”. The Main gear still has the kits sprue, with identifying number. Note that the kit part F5 has been moved to the same sprue as part F2. The main gear bracing struts are free from the sprue and not numbered.

SAC gear may require some cleanup for the few areas that still have still seam lines. You many also sand and prime the struts to remove some of the rough texture that appears in some areas. Installing the new gear requires CA glue or non-traditional modeling adhesives. SAC recommends that the gear is for experienced modelers that are accustomed to working with metal gear.

When you need strong landing gear that will not let your model down, SAC has you covered. I would like to thank Scale Aircraft Conversions for this review sample.