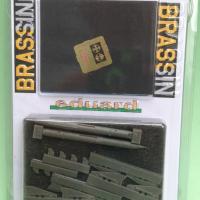 The AS.34 Kormoran missile is a German developed anti-ship missile. The Kormoran 1 was originally designed in the 1960’s for use by the German Navy and was flown on the F-104 and the Tornado. It was also used by Italy. The Kormoran 2 was an updated version of the Kormoran 1, using the same missile body, but with updated avionics, an improved and larger warhead and better rocket motor to give it longer range.

This is another nice set in Brassin’s weapons range and for a change it is not a US or Russian weapon. The set includes one missile body for each of the Kormoran 1 and for the Kormoran 2. Be sure to check which one you are using as they are slightly different, primarily in the exhaust/nozzle area and in the fairings along the side of the missile bodies. The larger rocket fins are apparently different as they are numbered differently while the smaller steering fins are the same on both missiles.

The main fins look to be fairly substantial, but you still need to take care in removing them from the pour stubs. I recommend a fine razor saw as I tried my sprue nippers and managed to send the front tip on one fin off into the murk of my model room floor and had to reconstruct it from card stock. Unlike most other missiles, the fins do not fit completely flush against the missile bodies as close-up photos show a small gap in front of and aft of each of the main fins, so I did a lot of test fitting as I sanded down the pour stub attachment points to ensure that I did not eliminate this gap.

As shown in the attached photographs, the cast detail on each missile is outstanding as one would expect in the Brassin range and will make a nice addition to your armory. My only complaint would be that as often the missiles were carried in pairs, you will need to buy 2 sets to load up your F-104 or Tornado instead of just one – however, I doubt the unused missiles will sit for long as they look very business-like when mounted on an aircraft.

Highly recommended. Thank you to Eduard and IPMS-USA for the review sample.