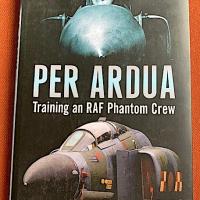 Phil went through pilot training in the late 60’s before the Phantom was adopted for the RAF. He takes the reader through his experiences in primary flight training and fast jet training as he earned his commission as an officer and eventually his pilot wings. He discusses the different trainers he flew as well as describing some of the more memorable flights he had. After earning his wings, Phil was initially posted to Canberras which he flew for several tours before being assigned to the Phantom.

David takes the reader through the initial training that all navigators underwent learning basic aerial navigation techniques. He expected to be posted to Nimrods, but due to fortunate pairing with a fast jet pilot in an early training stage, he shifted his sights towards the mighty Phantom.

The structure of the book bounces back and forth between the two authors as they each discuss their experiences in training. However, it is not always clear who is writing, and I had to back up several times to sort out whose experiences I was reading. As David and Phil went through the F-4 conversion course about 5 or 6 years apart, their experiences do not always match up as things changed in that period. So, while the title of the book implies that this is the story of how David and Phil trained together to become a Phantom crew, it is actually two intertwined stories of how each of the authors was trained to fly the Phantom.

There is a particularly good discussion of air intercept training from both the pilot and the navigator’s perspective and reminded me of the training I went through to become a radar intercept officer (RIO). Here the back and forth style works well as you get a particularly good sense of what each was looking at and how pilots and navigators would learn to work together as a team. Their discussion of BOLDFACE drills/emergency procedures illustrates just how important an aircrew team works together.

My only gripe out the book is the repeated references to other books the two authors have written or are in the process of writing. I found it a bit irritating for them to start a story, only to stop abruptly with a reference to one of their other books.

The book also includes quite a few good quality black and white photographs of the various training aircraft they each flew as well as the Phantom and several of its color schemes.

I enjoyed this book and I strongly recommend it to anyone interested in the modern RAF and what it took to become a Phantom crew.

Thank you to Casemate Publishing for the review book and to IPMS-USA for letting me read and review it.

Phil and the Gnat