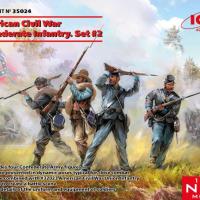 ICM continues its dedication to the American Civil War with two additional sets, this review covering one of them. With these new sets, you can now model an actual direct clash between opposing forces, this kit being paired with #35023 American Civil War Union Infantry Set #2. As you can guess, these two sets would make for a very dramatic diorama.

The set I’m reviewing consists of the usual four full figures along with two sprues of their excellent Civil War equipment. Two of the molded figures are in the relatively standard formal Confederate uniforms of gray and light blue, while the other two represent the far less formal attire of the typical rebel from the later stages of that war. All four figures go together with a minimum of fuss, and if carefully assembled, filling or puttywork will mostly be confined to the bed rolls worn by the two latter-day soldiers. All four figures feature dramatic poses and “war faces” suitable for a hand-to-hand encounter. Although a wide range of weaponry is offered on the equipment sprues, if you want to follow the cover art as well as keep things simple you are confined to the four rifles with bayonets supplied. You can add bayonets to some of the other muskets as well, of course.

On a side note, I continue to be a bit disappointed with the model industry in failing to supply a single figure with the longer frock coat so often seen in the early days of the conflict, as these were quite prevalent as well as being distinctive. Perhaps that shortcoming with be corrected in some future release.

All in all, this is a lovely set with lots of potential, especially if paired with their sister set. Interestingly, if you want to keep it simple you can pair the two traditional dress uniform figures against the latter-day figures, as the traditional Confederate uniforms were virtually indistinguishable from Union uniforms except for the color. I’m not 100% sure if ICM didn’t have this in mind when sculpting these. In any case, this is a terrific set and I’m looking forward to getting the companion set for some real diorama action.

My hats off to ICM for continuing to make new and fascinating kits under the most dire circumstances and maintaining their level of quality throughout these troubling times. I heartily recommend this (and the companion set) to any aficionados of the Civil War era.

Thanks to ICM, of course, and also to IPMS/USA for a chance to add these lovely pieces to my collection. Stay safe and happy modeling!