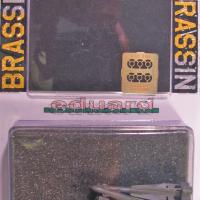 A word of caution up front, if you read my previous review on the 1/72 scale AIM-4D release by Eduard, this is going to seem very familiar. If you missed this review, then please enjoy what follows.

With development beginning in 1946, the Hughes AIM-4 Falcon, or more precisely, a version of a missile that would become the Falcon, was first launched for testing in 1949, and would become the first operational air-to-air missile of the U.S. Air Force. The AIM-4D, or GAR-2B, was the final version of the original missile, and around 4000 of these missiles were built with the first of them entering service in 1963. The missile had a less than spectacular combat record in Vietnam claiming five aircraft (four MiG-17’s and a single MiG-21) for 54 missiles launched, and by 1973, the AIM-4D was no longer operational. The missile was 79.5 inches long, had a 20-inch wingspan, and weighed 135 pounds. Travelling at Mach 3 on its solid fuel Thiokol M58 rocket, the missile had a range of six miles to deliver the 7.6-pound warhead.

This Eduard Brassin set consists of four missiles that are cast beautifully in gray resin along with a single photoetch fret that holds the rings that represent the exhaust of the rocket motor, and a small decal sheet. Each missile receives at least 23 individual decals, although extra decals are provided if you choose to label yours as “Inert”. At least one spare of each of the decals are available, just in case they are needed.

Eduard did a great job capturing the detail of the AIM-4D Falcon, and the fins are appropriately thin for the scale. I used a medium viscosity CA to attach the PE parts to my missiles, which I then painted a coat of Alclad Primer White followed by Model Master Acryl Gloss White, then after masking, I added Model Master Acryl Insignia Red. The seeker head received Model Master Acryl Gloss Black. The decals settled without issue using Micro Set and Micro Sol over Alclad II Gloss Klear Kote, which I also utilized for the final finish.

My hits for this set would have to start with the fine level of detail cast into the resin missiles as well as the use of photoetched parts for the exhaust rings. The missiles build up quick and easy with only removal from the pour plug being needed.

I am proud to report that I did not identify a single specific miss during the construction of my missiles. I would like to suggest that Eduard consider a decal in future releases of the AIM-4, in any variant or scale, a wrap-around decal for the edges of the fins. Lining up the decals on two sides of four fins, and then hand painting the edge may be daunting for less experienced modelers.

In conclusion, I would highly recommend these Eduard AIM-4D missiles to modelers who are looking to add the Falcon to their 1/48 scale Air Force Phantom II in Vietnam service. There should be no fit up issues when installing the missiles onto a plane, and modelers with some experience in working with resin and photoetched parts should find it easy to utilize this set. The only challenge could be the very small decals used on the missiles as well as the eight fin decals per missile as previously described, but patience and a sharp set of tweezers will help with this.