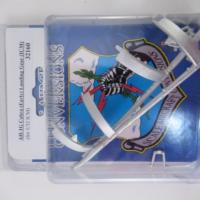 Having built two of the ICM 1/32nd scale Cobras I can tell you that the mounting point is a fragile joint. On my first one I broke it off twice and had to pin and glue it back on. It was frustrating as it was near the end of the build.

Well SAC has taken that frustration out of the equation. Inside their typical blister pack are two white metal landing gear and four parts for the ground handling wheels. Mine were perfectly cast and were exact replicas of the kit landing gear, but stronger. This set has the aerodynamic fairings installed on Vietnam era Cobras. These fairings were later removed and the round crosstubes remained.

As they were exact replicas of the kit landing gear, they also had the nubs on the end where the tow bar is supposed to go. This area is supposed to be a ring to hook the real tow bar in, however, the kit and SAC have the nubs. It is a simple operation to cut the nubs and drill progressively wider holes to replicate the real thing.

I did need to sand them with some 1000 grit sandpaper to ‘smooth’ them out but after that the fit was perfect. A quick coat of primer and paint and they were good to go. I added mine with five-minute epoxy and the landing gear were attached and ready to go.

I did not build up the ground handling wheels. I didn’t build up the kit ones or the SAC ones. They appeared to go together perfectly. They are only mounted on the helicopter to move it around and then removed.

This is another great set from SAC. Clean up was easy. The strength is appreciated during handling. As an added benefit much of the landing gear is forward of the center of gravity so this helps the helicopter sit solidly on its gear. Overall, it performed exactly as expected. I can’t wait for the AH-1G landing gear with just the round cross tubes, which are also included in the kit.

Thanks to Scale Aircraft Conversions and IPMS/USA for the review copy. You can obtain your copy contacting them directly at www.scaleaircraftconversions.com or at your local hobby shop or online retailer.

Close up of ground handling wheel