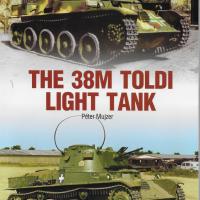 The following appears in the Introduction.

The 38M Toldi Light Tank Photosniper is the latest book published in the Photosniper series by Kagero Books. This 11.6” (297mm) x 8.2” (210mm) A4 format paperback has 120 pages with 290 black and white photos, 10 painting schemes and is printed on gloss coated paper.

The author starts by giving the reader a brief introduction into the history of 38M Toldi Light tanks. It’s interesting to note there are only two Toldi’s surviving, both were captured by the Red Army and are in the Tank Museum of Kubinka. In researching for this review, I came across a source that stated the tank designation “Toldi” was the name of a Hungarian medieval warrior.

The first two chapters are dedicated to the brief history of Hungarian Army and Armoured Forces in WW2, and the design industry of the tank. The author includes two images on page 9 depicting an automotive depot with a large assortment of pistons and engine waiting for repair and maintenance. The images are crisp and clear especially due to the age of photos.

In chapters 3 and 4, the author describes the history of Sweden’s L-60 and the background of the Hungarian Defense Departments measures to obtain the licensing and purchasing of the Landsverk L-60 production rights from Sweden.

On page 15 is a detailed photo of the frontal view of the 38M Toldi Light Tank. Tank insignias can clearly be seen in the image. The author includes Images in chapter 5 of the 20mm and 8mm machine guns.

In chapter 5, the author presents information on the design and production of the 38M Toldi light tank with excellent historical images of various radio equipment, a detailed photo of the NAG engine, closeup views of the track and sprockets, and numerous images with crews in various settings. Not only would these images be helpful for research, but a good basis for any diorama the modeler is contemplating building. On page 36 a side view of the track and sprockets can be seen. Also, of interest on page 40 is a photo taken by a US Sergeant in Bavaria in 1945 of a 44M Toldi tank with a rocket launcher located behind the turret.

Moving on to chapter 6, the author describes the organization and training of the armoured troops equipped with the 38M Toldi light tank as well as devoting nearly forty-five pages to the operational history of the troops using the tank in chapter 7. The author summarizes the Yugoslavian and Soviet Campaigns in 1941, the Eastern Front in 1942, and the final battles in 1944.

In chapter 8 the author includes paragraphs of the 38M Toldi light tank in Soviet service while chapter 9 is dedicated to a few pages depicting the camouflage and markings of the tank in Hungarian services.

The author presents a detailed history of the 38M Toldi Light tank with imagery capturing the tank in various settings with and without military personnel. The images are clear and crisp despite their age. Not only would this book make an excellent resource for the military history buff, but for the armour modeler this book provides numerous photos to use for future builds. The level of detail in some of the photos also makes this book a great resource. For these reasons this book will make an excellent addition to any modeler’s library.

Thanks goes out to Casemate Publishers and IPMS/USA for this review sample.