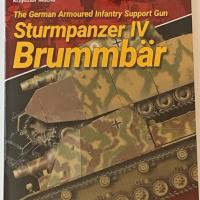 A variant of the iconic Panzer IV, the Sturmpanzer IV Brummbär (SdKfz 166, Sturmgeschütz IV für 15cm StuH 43) was a German self-propelled assault gun. Work on the design began in 1942 with a goal of creating a vehicle well suited for the demands of urban warfare. The gun was based on the PzKpfw IV Ausf. E and F and, later, Ausf. G. Initially, the vehicle carried 15 cm StuH 43 howitzer, which was later replaced by a 15 cm StuH 23/1 L/12 weapon. The Brummbär went into production in 1943 and its first use was in Operation Citadel around the Kursk salient. Eventually, units equipped with this assault gun defended the Anzio and Normandy landings and participated in the Warsaw Uprising.

In total, 300 vehicles were built during the war, with 4 remaining survivors. The drawings in this publication are based on the vehicle at the Kubinka Tank Museum near Moscow.

This softbound 24-page manual consists of a brief one-page introduction, with the remaining book devoted to black-and-white line drawings with descriptive captions in English and Polish. Inside the book is a large fold out sheet with detailed drawings similar to the ones in the books itself. The book also includes a separate 8x11 inch full color poster of a Sturmpanzer IV on the eastern front.

For model builders, in addition to the highly detailed drawings of every rivet, panel and bracket on the vehicle, the publication includes four pages of full color drawings depicting the Brummbar’s camouflage patterns for all of the campaigns it fought in during the war. These are very nicely done and would be a nice reference for completing a model with an accurate camouflage pattern.

I would recommend this publication for any modeler wanting to ensure every rivet and panel line was accurate on their Sturmpanzer IV, or for anyone else who just really enjoys great technical drawings of significant, if somewhat uncommon, military vehicles.

Thanks to Casemate Publishing for the review sample and to IPMS/USA for this review product.