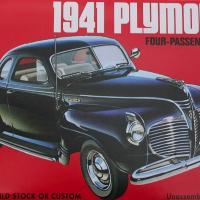 In fact Jay Leno has a 1941 Special Deluxe Coupe in his collection. He has said that its one of the nicest automobile’s he has ever owned.

The kit is produced by Round 2 Models, a well-known company who bought the AMT Line and is re-issuing the kits in very colorful packaging. The box art work shows a close up of a black 1941 Plymouth with a red background.

The kit consists of approximately 117 parts and comes on 8 white sprues, 1 chrome sprue, and one clear sprue. The parts are nicely molded and there is a minimal amount of flash. This is to be expected, keeping in mind the age of the molds. All panel lines are raised and all the sprues have large gates. The 2 page instruction sheet shows the suggested assembly through 7 steps starting with the engine assembly, and progressing through the interior, wheels, body, chassis and final assemblies. The kit provides parts to build either a stock 1941 Plymouth or a Custom Coupe. The custom differs in the engine (a modern V8 vs a period 6 cylinder), wheels, interior, and decals.

I chose to build the stock 1941 Plymouth Coupe after watching the YouTube video of Jay Leno’s Special Deluxe Coupe. This kit is a re-box of the older kit. The kit fits together very nicely but filler was required to fill the seam between the front body panel Part 44 and the body. I had no problems with gluing together any of the remaining assemblies and additional filler was not required. All the pieces did require a little cleaning up of flash. Again please remember that the molds for this kit are getting old and the flash is to be expected. The engine is pretty basic so I chose to complete the model with the engine hood glued down. The interior is also pretty basic with the interior door handles molded as outlines on the door panels. For the Custom the only alteration needed for the interior is a floor shifter instead of the one on the column.

The decals are printed within register but I did not use them and there are no instructions on where to place them on the model.

Overall the kit is a joy to build and builds into a handsome 1941 Plymouth! Since World War Two for the USA started on December 7, 1941 which resulted in all automobile industries being mobilized for war production. So this is probably one of the last automobiles made by Plymouth until after 1945/46.