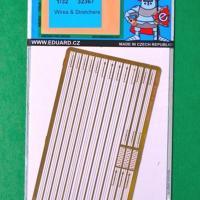 With the ever growing number of 1/32 scale rigged aircraft kits on the market, Eduard now offers a generic photo-etched set of 1/32 scale flying wires and stretchers (AKA Turnbuckles). Metal flying wires are a logical and much desired aftermarket detail set for model builders wishing to accurately replicate the metal wires used on most Allied aircraft built after 1915/16. Unlike the majority of other p/e sets cataloged by Eduard, a specific aircraft type (or kit) is not specified. Instead, the fret includes 33 anchoring rings, wires of differing lengths with a stretcher near one end and others including stretchers with tabs that may be used as attachment points to fit a variety of aircraft (see the photo of the fret below). Model builders will need to determine if this set fits their needs. I say ‘fits’ because the wires themselves are provided in only two lengths…2 1/14” and 5 1/8”. There are 12 of the short lengths and 20 of the longer lengths (10 each of wires with the two types of stretchers). These lengths will accommodate most single-place biplanes but may not be long enough for larger wingspan aircraft.

Prototype metal rigging wires usually are steel wires, so it would seem appropriate for Eduard to provide nickel silver photo-etched parts. Surprisingly, as the photo below shows, Eduard instead packages a fret of brass photo-etch parts in this set…making it necessary for modelers to prepaint the wires and stretchers before attaching them to one another and installing the rigging. And, since brass is prone to kinking, careful handling during assembly also will be mandatory.

The process of installing the wires and stretchers is clearly illustrated in the two-sided instruction sheet that is included with the photo-etch fret. It is a simple process. First, holes are drilled adjacent to struts for mounting the eyelets and wires. Installation involves inserting and anchoring one end of a wire in one of the predrilled holes with superglue and attaching one of the mounting eyelets in the opposing hole. Then the anchored wire is extended to and inserted through the eyelet. The end of the wire is then folding back over itself and attach with superglue (See detail photos below).

This is a much needed detail set for biplane model builders, but it is my hope that Eduard will also consider offering a version of this set in a bright photo-etched nickel silver so it will not be necessary to prepaint parts before using them and to minimize the likelihood that the thin wires will be kinked during assembly.

This set is recommended to model builders with some experience rigging aircraft and an appreciation of how delicate thin photo-etched brass will be to work with. My thanks to Eduard for providing the review sample and IPMS/USA for the opportunity to review it.