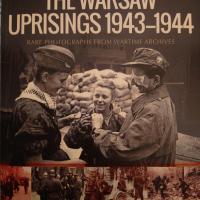 The Warsaw Uprisings 1943-1944 is a photographic essay by Ian Baxter, consisting of hundreds of black and white photos and accompanying text. This is not merely a military book, but an indictment of the Nazi regime and its military that carried out large scale, institutionalized genocide between 1939 and 1945. The searing and horrific images tell the story of two uprisings against the Nazis in Warsaw, Poland: the first is the 1943 Jewish ghetto uprising, the ghetto's destruction by the Nazis and the liquidation of the remaining community (60,000). The second is the story of the 1944 Polish Home Army uprising which resulted in the 200,000 civilian deaths and the wholesale demolition of Warsaw, as the Soviet Army viewed the carnage across the Vistula river.

The photos were sourced from the US Holocaust Memorial Museum (USHMM) in Washington D.C. and the National Archives and Records Administration, and includes numerous photos from an album prepared by SS and presented to Heinrich Himmler (Warschauer Aufstand 1943).

The first chapter, entitled Prelude, includes photos of life in the ghetto prior to the uprising (1941-1942): the overcrowding in the densely populated, walled-off ghetto, the poverty and sickness, and deportation to death camps via cattle cars. The faces of the people tell the story of the tragedy, the pain and suffering, much more than the text.

The next chapter, the Jewish Ghetto Uprising, begins on Passover eve April 19, 1943, when the SS starts the final liquidation of the ghetto under Himmler's orders, only to be met with fierce opposition from the organized resistance fighters of the ZOB (Jewish Combat Organization) and the ZZW (Jewish Military Union). As the author notes, "They knew they would not be able to defend themselves for long; it was a 'battle of honour', and a protest against a 'world of silence'." The heroic struggle ended May 16 when the Great Synagogue was blown up. 13,000 Jews were killed in the fighting according to the book, the remainder sent to death camps (no figure is provided in the book, 42,000 is estimated per the USHMM website). The photos show the destruction wrought: civilians in ragged clothing lined up by the neatly dressed German soldiers and their SS officers; the shelling of occupied buildings; the underground bunkers of the resistance; civilians jumping to their deaths from buildings ablaze and collapsing. I was particularly interested in the post-war fate of the leaders of the German SS and the Jewish resistance. Ferdinand von Sammern-Frankenberg was the SS officer initially in charge, and relieved of duty when his troops did not immediately suppress the rebellion. He was court martialed in April 1943, and found guilty of "defending Jews". In 1944 he was killed in Yugoslavia by a partisan ambush. Jurgen Stroop, who replaced von Sammern was convicted by a US military tribunal for ordering the summary executions of American pilots, but not executed. Instead he was extradited to Poland in 1947, where he was found guilty of mass murder and executed in 1952. The ZOB commander Mordechaj Anielewicz was killed in what was reported to be a mass suicide in order to avoid capture. His deputy, Marek Edelman, became a cardiologist, opposed Poland's communist regime, and was a member of Solidarity. No ZZW leaders are mentioned in the book, and little is known about the fate of the ZZW leaders, as this right wing group's involvement in the uprising was suppressed in communist Poland after the war.

The 3rd chapter, the Polish Home Army ("PHA") Uprising 1944 begins with a 40,000 man offensive in August after the success of D-Day and the imminent Red Army summer advance on Warsaw. The PHA was led by Tadeusz Komorowski as Commander-in- Chief. The German SS troops were led by anti-partisan veteran Erich von dem Bach-Zeleski, with Heinz Reinefarth as his 2nd in command. Initially, the PHA was successful and controlled much of the capital, however, they could not drive out the Germans, and there was "no communication on developments east of the Vistula". The Soviet Army assault on Warsaw had not materialized. In fact when PHA representatives met with Soviet officers outside Warsaw, their officers were shot and the others impressed into the Red Army. The PHA held out for 63 days, battling the Germans in the streets, cellars and bombed-out buildings. By September, a stalemate resulted, but the PHA losses were high (22,000 killed or wounded vs. 11,000 for the Germans), and both sides agreed to a halt to hostilities to allow 20,000-25,000 civilians to leave the city. Fighting then continued as the Poles did not trust German calls for capitulation, while promising no reprisals. Finally, the PHA's commander Bor-Komorowski surrendered to Bach-Zelewski on October 2. While the military battle raged on the streets of Warsaw, it was completely overshadowed by the barbaric slaughter of civilians by Bach's SS (Korpsgruppe Bach, included the infamous (Oskar) Dirlewanger and (Bronislav) Kaminski brigades under Reinefarth's command that accounted for an estimated 60,000 deaths in Wola and Ochota neighborhoods, as hospitals were burned with patients inside, after nurses were gang raped and then hanged with the doctors). Photos in this chapter are primarily of well attired SS commanders (in German and also Cossack uniforms) and their soldiers, as well as numerous Panzer regiments ordered to Warsaw to quell the fighting. There are several photos showing PHA soldiers wearing captured German uniforms, employing a captured Panther tank, and an uplifting photo of female fighters, members of the Battalion Parasol, a scouting division of the PHA. There are no photos of the civilian massacres or carnage. The chapter ends with pictures of a German flamethrower setting fire to a PHA hiding place, German soldiers advancing amid a ruined street besides a pile of rubble 10'+ high, and civilians evacuating from the city.

The book concludes with Aftermath, the fourth chapter. The PHA soldiers were the fortunate ones, they ended up in Wehrmacht POW camps. Of the 500,000 civilians who surrendered to the Nazis, about 100,000 ended up in concentration camps and several thousand were sent to Germany as slave laborers, in contravention of the evacuation agreement. By January 1945, all buildings, schools, libraries, churches, and historic monuments in Warsaw were systematically razed by the German Army. The city was to be a military transit station only. On January 17, the Red Army captured Warsaw. Photos include the surrender of PHA Commander-in- Chief Bor-Komorowski to Bach-Zelewski of the SS, civilians being transported to Ravensbruck concentration camp, and the widespread rubble of a destroyed Warsaw, January 1945.

What was the fate of the key players, I again wondered? PHA commander Bor-Komorowski moved to London after the war, and from 1947-1949 served as Prime Minister of the Polish government in exile. He died in 1966. Did each Nazi SS leader face his judgment day at Nuremberg and a date with the hang man? Well not exactly. In exchange for testimony against his superiors, Bach-Zelewski never faced trial for war crimes, nor was he extradited to Poland or the Soviet Union. He eventually served time for the murder of Nazi opponents in the 1930's, though "none of the sentences referred to his role in Poland, in the Soviet Union, or his participation in the Holocaust, although he openly denounced himself as a mass murderer" (from Hannah Arendt's book, Eichmann in Jerusalem: The Banality of Evil). In May 1961 Bach-Zelewski gave evidence for the defense at the trial of Adolf Eichmann in Israel. Heinz Reinefarth, the SS commander responsible for the Wola and Ochota massacres, was sentenced to death by a German military court for failing to defend a German-Poland border town to the last man in 1945. After the war, British and American authorities denied his extradition to Poland as they decided he could be useful as a Nuremberg trial witness. He was later arrested by the local court in Hamburg for war crimes, but released on the grounds of lack of evidence. West German courts ruled that depositions were not sufficient to secure his conviction, and also, that genocide was not in the criminal code of Nazi Germany and therefore, would not be applied retroactively (italics added for emphasis). Elected mayor of the town of Westerland, he died in 1979 in his mansion in Sylt. Oskar Dirlewanger, head of the Dirlewanger Brigade (largely made up of 2500 criminally insane convicts) described by the author as the sickest man in the SS, was arrested in June 1945 and likely died from mistreatment while imprisoned. Finally, Bronislav Kaminski, head of the German backed Russian Popular Army of Liberation (RONA) that burned down the hospital of the Marie Curie Institute among other outrages, was arrested and executed on Bach-Zelewski's orders in 1944, not for the rape and killing of civilians, but for his habit of stealing for himself and not delivering the loot to Himmler as property of the Reich.

While this book may be of interest to modelers, it has far greater importance than simply what armor and camouflage Panzer units were utilizing in 1944-1945 on the Eastern Front, or the detail of the uniforms of the SS commanders and their soldiers. The Holocaust and the fate of Eastern Europe in wartime has been written about extensively. For those who wish to go further, try Timothy Snyder's Bloodlands- Europe Between Hitler and Stalin, a comprehensive account of the Soviet and Nazi killings of 14 million civilians from 1933-1945 in the "zone of death between Berlin and Moscow". Thanks to Casemate Publishers for the copy, and thanks to IPMS USA for the opportunity to read and review this book.