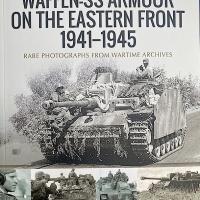 Hitler’s invasion of the Soviet Union, codenamed Operation Barbarossa, was arguably the pivotal moment of the Second World War. Initially the onslaught was staggeringly successful with, as the superb contemporary images in this book show, Waffen-SS armored divisions leading the charge. But the Nazis had underestimated the Russians’ determination to defend their homeland and the logistical problems compounded by the extreme winter weather conditions. After early victories such as the recapture of Kharkov in early 1943 and the Kursk offensive, commanders and crews of armored vehicles such as Pz.Kpfw. I, II, III, IV, Panther, Tiger, King Tiger, assault and self-propelled guns had to adapt their tactics and equipment to what became a desperate defensive withdrawal eventually back across a scarred and devastated Eastern Front. Even during the last months of the war as the Panzers withdrew through Poland and into the Reich, these exhausted elite units, broken down into small battle groups or Kampfgruppen, fought to the bitter end. With authoritative text supported by a plethora of rare fully captioned photographs, this classic Images of War book informs and inspires the reader revealing the key role played by Waffen-SS Panzer units in this most bitter campaign.

Just reading the list of chapter titles gives one a sense of how badly Hitlers’ invasion of Russia went. As with all of Casemates’ titles, the reader can tell immediately that this is a very well-researched book. Each chapter begins with a succinct, yet heavily detailed summary of how the events played out in history.

It is my understanding that none of the photos in this book have ever been published before, so reading through this book is a bit like Christmas morning for the history aficionado. Bearing in mind that they were all taken between 1941-1944, I would consider that most of them are fairly high quality. A few are on the grainy side, and a few are a little blurry. Again, these were taken by amateur photogs (Soldaten) 78 to 81 years ago.

The photos are accompanied by very descriptive captions, often including Units, Ranks, etc. The mighty Tiger I, Prime Movers, and even a Panzerspahwagen, Light Armored Cars, Armored Half-Tracks and other machines are featured in action. The photos covey to the reader a sense of how miserable this campaign was for those involved. From the roasting hot Summer on the Steppe, to the ice & snow, and the seemingly always present deep mud, it’s all there.

In all, this book is a highly researched description of Hitlers’ worst military blunder, steeped in never-before seen photos. For the Modeler and Historian alike, this book is a must have. My thanks and gratitude to Casemate Publishing and IPMS/USA for the review copy. Now, to think even harder about starting my RFM Tiger I....