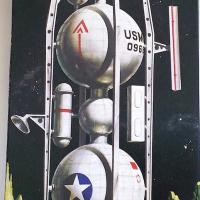 The U.S.Moon Ship is Round 2 Models first release, after having been originally released by Lindberg Models in 1958. It was subsequently re-released a couple more times in the decades that followed and was based on space flight concepts of the era.

The kit is pretty simple and straight forward consisting of only 41 pieces, including 1 transparent red sprue and 2 sprues molded in white in addition to the main components of the space craft. There is an easy to follow instruction sheet, and 1 sheet of decals.

The build was simple and quick, and other than some minor issues with getting the large star decals to conform to the shape of the hull, it was an enjoyable endeavor having been completed in two evenings at the "bench".

I would most certainly recommend this kit to a novice builder or anyone wanting a quik build that produces satisfying results. The kit would make a great parent/child project or "group build" project.

For those modellers wanting to "take it up a notch", this kit would also be an excellent candidate for a simple lighting kit.

I would like to convey my thanks to Round 2 Models for the opportunity of reviewing their release of the U.S. Moon Ship and look forward to what their future releases have in store.