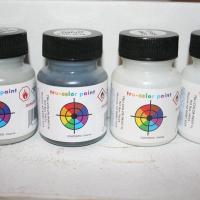 When I heard that Floquil railroad paints were being discontinued, I rushed out and bought several bottles of my favorites, Grimy Black and Reefer White. But knowing that these two or three bottles wouldn’t last forever, I asked the proprietor at my LHS (The Hobby Depot) if there was any replacement on the horizon. Dick replied that there was already a line of railroad paints which had been out for several years, and that he had just received a stock. Sometimes it’s good to go to a shop which carries supplies for other hobbies, like model railroading. I bought TCP005, gloss white, TCP009, grimy black, TCP800, flat white and TCP828 flat imitation aluminum.

These are lacquer based paints, not enamels or acrylics. The list of ingredients is as follows: acetone, ethanol, MEK, toluene, propyl alcohol or butyl alcohol acetic ester. The label warns that it’s flammable, and harmful or fatal if swallowed. There’s also the usual precaution to use it in a well-ventilated area.

OK, now that we’ve gotten past the “safety” part, let’s look at the paint. The paints require only a little stirring, and the instructions suggest shaking the bottle to get even color mixing. Unlike Floquil paints, there’s no layer of sludge-like pigment in the bottom of the bottle which requires thorough stirring for good flow.

The website says that TCP005 through TCP340 are sprayable paints. TCP800 through TCP845 are brushable.

I first used the TCP005 white on a couple of airliners, using my Paasche airbrush, at 30 to 40 psi. The paint did a great job of covering, went on smoothly, and dried to a high gloss. As usual with gloss paints, it took about an hour before it was safe to handle the model.

I later tried the flat white, TCP800 with the airbrush. It quickly taught me that this wasn’t very good airbrush paint. The paint dried too quickly, as it left the nozzle, and built up on the tip and air cap. I now know that this is recommended for brushing.

I got a Space Shuttle to build, partly because it had large areas of black and white to paint. There were some areas which would need masking, some of which were pretty complicated.

I used the grimy black on the bottom of the space shuttle, and gloss white on the top. The paints went on pretty well. I painted the white top first, then put on masks and painted the black bottom and nose areas.

The white went on well, and so did the black. There is a gray stripe on the leading edge of both wings, and I masked both the black and white to apply the gray. I used Tamiya tape and 3M blue masking tape to avoid overspray on the painted areas.

The lesson I learned here is that the plastic needs to be cleaned before applying this paint. The tape removed large areas of the white and a couple of spots of black.

Where I tried to hand brush the gloss white didn’t work. The paint is meant for airbrush, and doesn’t cover well, leaving brush marks and voids. I wound up using Post-It Notes as a low-tack mask for the areas damaged by the tape.

This is good paint, once you learn how to use it. Learn from my mistakes, and go on from there. The grimy black does very well on wheels, and the white was superlative on those airliners. If you’re like me, and miss the Floquil Railroad Colors, this is going to be the replacement for many uses. I would also like to note that these are larger than the usual bottles at 1 ounce so they are good value.

Thanks to IPMS USA for allowing me to review this product.