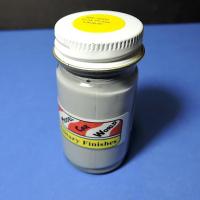 Model Car World is a model company that specializes in resin car bodies and paint finishes matched to automotive colors. MCW was purchased by Wings Wheels and Waves in 2015 and they have expanded their paint line to include military colors.

The primer comes in 1oz. bottles that have a bb inside to facilitate mixing. The primer is pre-thinned for airbrush and is recommended by MCW for their finish paints

The primer is very thin and should be thoroughly shaken before spraying. MCW provides a thinner to be used with their paints, but the primer was pre-thinned and did not require additional thinning. The paint should be applied in thin wet coats, and the lacquer dries very fast. The airbrush should be 2 – 3 in. from the surface to obtain a wet coat.

After shaking, I applied the primer to plastic straight from the bottle with my Badger airbrush and .21 tip. The primer flowed smoothly in a wet coat and gave nice coverage with a very smooth finish with the first coat. The primer dries to a slight eggshell finish within seconds and loses its odor within a minute or two. The primer completely covered some pencil lines on the surface of the plastic. I did get some tip drying of the airbrush after a minute or two. The primer is not dead flat but has a slight eggshell sheen.

After about an hour I applied MCW's gloss lacquer finish paint to the primer on plastic and let it dry for about 15 minutes. I then tried using very tacky tape to test the adhesion. None of the finish or primers pulled up from the MCW and Tamiya primers, but a portion of the finish paint on Alclad primer did pull off.

I also applied the primer to a resin truck tarp and got very good coverage with a single coat of the primer. The paint was very smooth and did not obscure any of the details in the resin. After about an hour I applied a very tacky tape but none of the primer pulled off. I applied a finish coat of MCW’s gloss lacquer finish paint and tried to pull it off with tape about 15 minutes later, but there was no loss of adhesion.

I tested the primer on a piece of photoetch brass. After scuffing the PE with 600 grit sandpaper I applied the MCW primer, then an hour later applied MCW's gloss lacquer finish paint. After a couple hours, I tried to pull off the paint & primer with tape but there was no loss of adhesion. I scratched the paint with a toothpick but there was no chipping. The primer has very good adhesion to photoetch.

The airbrush cleaned up very quickly with hardware store lacquer thinner after using the primer.

The MCW Primer applies very easily to a smooth opaque finish with a slight eggshell sheen. The primer adheres very well and worked well with the lacquer finish coats I tried. The primer worked well on plastic, resin and photoetch brass. This is a nice, easy to use, durable primer.

Thanks to MCW Finishes for producing these military paints and for providing samples to IPMS for review.​

Primer applied to a model part

Primer sprayed on metal then painted

Primer sprayed on metal then painted

Primer sprayed on plastic then painted

Primer and paint applied to model part
Previous Next