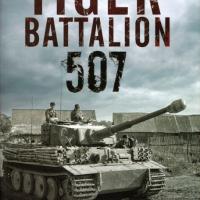 As a preface to this very interesting book, the author, Mr. Schneider provides a snapshot of himself, aged 19, Schneider volunteered for the Panzer Arm in March 1941. He was one of the first five men sent to the Eastern Front. He took part in the Caucasus campaigns and joined the Heavy Panzer Battalion 507 in 1943. He next moved on to the panzer grenadiers where he was given a Wanderer bicycle, a Panzerfaust, an assault rifle, and was sent to fight the US Army on the Western Front. His decorations included the Panzer Assault Badge and the Iron Cross Second Class.”

In this book, which took four years to complete the German to English translation, the author provides a great deal of insight into his life as a young Wehrmacht soldier, as he was introduced to the promising life as a member of Panzer force and as a Tiger tank crewman.

There is also a great deal of details about how the Wehrmacht army was recruited, trained, and organized. I really had very little knowledge about the actual organizational of a typical heavy tank battalion nor the complexity of its organization. As the Battalion was trained and fully equipped with its 45 Tiger tanks, and counted amongst its primary components of staff command group, a signals platoon, armored reconnaissance, pioneer, flak, repair, recovery, admin, provisions and baggage platoons, as well as three heavy panzer (with 18 Tiger I’s each), and a workshop company.

The various diary entries provide a better and more detailed insight of their daily activities than I had previously understood.

There are a large number of black and white maps provided to guide the reader over the various battlefields. This book is based on the number of personal notes, letters, and diary entries of the numerous survivors of Heavy Panzer Battalion 507, collected during reunions and from 1977 through 1982. It is essentially a diary tracking the Battalion over the years from 1943 to 1945, covering the 500 days it existed.

Several aspects of this book are most rewarding.

But the German Panzer troops in Battalion 507 continued to fight, regardless of the eventual outcome.

My thanks to Casemate Publishers and Greenhill Books for their review copy and my thanks to IPMS/USA for my opportunity to thoroughly enjoy, read, and provide this review.