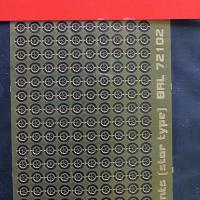 For those unfamiliar with carrier aviation, when an aircraft is not actively in use, it is secured to the deck using a come-along device between attachment points on the aircraft and tie downs on the deck. The tie downs are dished out areas on the deck (flight deck and hangar bay) with a welded on set of metal rods that form a star shape. I became most familiar with a flight deck tie down during my shellback initiation as I blew the water out of one of the tie downs as I awaited the next station. When the flight deck or hangar bay has a fresh coat of non-skid applied, the tie downs are masked off. Depending on the era of the carrier you are modeling, you will find tie downs painted either white or a dark gray (I prefer Model Master Engine Gray to represent this).

Although it is difficult to find a model of an aircraft carrier deck in 1/72 scale, Italeri did release one (item 1326) that includes a catapult and jet blast deflectors, which I reviewed on this site in 2013. I was also able to find a resin deck section at one of the recent IPMS Nationals made by Just Plane Stuff in this scale, and I have an old Verlinden flight deck section with a catapult and jet blast deflectors in my stash.

Brengun has recently released a set of photo-etched tie downs that could be used with any of the aforementioned carrier decks, or would allow a person to create their own deck section, and add detailed tie downs. The tie downs simply need to be removed from the fret, and then attached where they are needed with the modelers CA of choice. The fret includes a total of 217 tie downs, so there should be a surplus for most projects (unless of course you are representing the full hangar bay or flight deck).

My hit is that the etching was very nicely done, and I took a comparison photo with the set included with my Just Plane Stuff deck to show the difference between those two. Although the rods that make up the star shape look very fine, they probably are closer to scale than some other representations. I do not have a single miss to mention with this set.

In conclusion, I would highly recommend this detail set for folks who are looking to add some nice looking tie downs to a kit representation of a carrier deck, or may be scratch building one on their own.

My thanks go out to the folks at Brengun for supplying this item to the IPMS-USA for review, to Dave Morrissette for allowing me to perform this assessment, and to you for taking the time to read my comments.