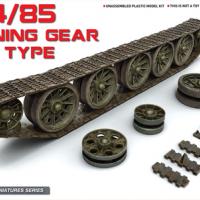 For the past couple of years, MiniArt has been producing some exquisite, super detailed kits of Soviet/Red Army armored vehicles from the Second World War and immediate post-war period. The company has decided to take various components of these kits, and repackage them as “Up Grade” sets for the kits of other model companies. In the case of the set under review, MiniArt has taken the running gear (road wheels, idler and drive wheel, plus tracks) from their T-44 tank kit, and reboxed them as T-34/85 Late Type components.

What’s in the MiniArt Box

There is no printed paper instruction sheet for this set included with the parts inside the box. Instead on the back of the kit box is printed a schematic showing the sprues, and the construction information. A painting guide is also provided on the back of the box, covering the following paint brands: Ammo by Mig, Mr. Color, Testors, and Vallejo. The parts included on the sprues are beautifully detailed, without sink marks, ejection pin marks or flash.

So, what’s in the box? MiniArt provides sprues from their T-44 tank kit, which provide the individual link by link T-34 late style tracks so well detailed that they even have tiny, almost invisible, casting marks on them. Along with the tracks are the so-called “spider” road wheels with rubber rims introduced on the T-34/85 but also used on early T-44 tanks. These were wheels with 12 large lightening holes on the outside circumference of the metal section of the road wheel, and 12 much smaller holes on the interior circumference of the roadwheel. This type of road wheel saved weight, and were “ribbed” no doubt for increased strength? T-34/85 tanks fitted with such wheels appear from my research to have come off the production line of Factory 183? Whereas those coming from Factory 112 appear to have had non-spider wheels? The fidelity of detail on the MiniArt parts is superb.

The oldest T-34/85 kit I could lay my hands on was Tamiya kit No. 35138, with a date of 1987 on the instruction sheet, though I have a strong feeling some (many?) of the components date from an even earlier T-34/76 Tamiya kit. This kit’s road wheels are of the non-spider design, and if the diagrams in my T-34 “bible” (“T-34 Mythical Weapon by Robert Michulec and Miroslaw Zientarzewski) are to be believed, are from a T-34/76 of the period 1940-41. While the metal center of the wheel is correct for a late war T-34/85, the rubber rims are the earlier T-34/76 design (see “T-34 Mythical Weapon” page 501). Tamiya’s drive sprocket and idler wheel seem appropriate for the T-34/85, though the drive sprocket is substantially wider than MiniArt’s. Utilizing MiniArt’s set would offer the modeler an alternative look to the road wheels (spider vs solid), and the idler and drive sprocket would be improved, finesse wise, by replacing the Tamiya ones with MiniArt’s. As for the tracks, to me it is a no-brainer: you definitely benefit greatly by replacing Tamiya’s 1 piece rubber band vinyl tracks, with MiniArt’s lovely link by link tracks. Tamiya’s tracks require a heated screwdriver to assemble, and the material used in their manufacture does not hold paint well, nor glue.

The next kit I compared MiniArt’s parts to was Dragon Models kit No. 6319 “T-34/85 Mod. 1944” Premium Edition. My kit is copyrighted 2006. Dragon’s and MiniArt’s idler wheels are almost identical, except that Dragon’s has a bolt on the hubcap which is lacking on MiniArt’s. Both styles are shown in the “Mythical Weapon” book. The two model companies’ drive sprockets are also almost identical. As for the road wheels, they are very similar, both being the “spider” design, but different, and again both styles are listed in the “Mythical” book. Like MiniArt’s set, Dragon’s “Premiere Edition” kit has the link by link tracks of a very similar design. So, if one is completely honest, there is no advantage that I can see in utilizing MiniArt’s set for what comes in the Dragon Models box.

The third kit I examined was Academy Model’s “T-34/85 No. 183 Factory Berlin 1945”, kit no. 13295. This kit has a copyright of 2015, so is a very recent kit. Academy’s road wheels are the non-spider type, which according to my research weren’t used, or at least weren’t very common on vehicles coming off the production line of Factory No. 183? They also appear very close in design to the ones in the ancient Tamiya kit, which indicates they might be more suited to an earlier T-34/76? Certainly then, utilizing the MiniArt set’s “spider” roadwheels offers the modeler an alternative or indeed a fix to something that is inaccurate. The Academy model’s idler wheel is very similar to MiniArt’s. As for the driver sprocket, Academy’s is similar in design to the one it the Tamiya kit, though Academy’s is more refined in detail, and matches the MiniArt one in width. Thus utilizing the MiniArt drive sprocket on the Academy kit would offer the modeler an alternative style. Academy’s track utilizes a link and length approach while as mentioned earlier MiniArt’s is a link by link set up. Both Academy and MiniArt utilize standard glueable and easily painted injection molded plastic. MiniArt’s tracks have a heavier look to them, which I think is more correct, and Academy’s links have two large ejection pin marks on every second link.

Eastern European produced T-34/85 kits? There has been a raft of such kits from the likes of Alanger, Ark, Maquette, Eastern Express, Zvezda etc. And Italeri has a T-34/85 that is reboxed Eastern European kit. Many dates from the 1990’s. I don’t have any of these kits directly to hand, however, I have been looking at images I could find from online reviews. Some of these kits come with the “spider” wheels, some with the non-spider design. Many come with horrid vinyl tracks. ALL could be noticeably improved by the use of this MiniArt roadwheel/track set!

Any other uses for this MiniArt set? SURE! If you happen to need a great set of T-34 tracks for any other vehicle that utilized the T-34 chassis (Su-122, Su-85, Su-100), get this set for the tracks, but then use one or more of the “spider” road wheels on the same vehicle. While these T-34 derivatives didn’t necessarily roll off the assembly lines with “spider” roadwheels, I have seen numerous historical photos showing a vehicle with one or more of them, a replacement to an original, non-spider wheel that was damaged in some way. So this set offers lots of possibilities!

To conclude: MiniArt have made a smart move to take various components from their excellent WW2 and immediate Postwar kits, and turn them into mini “upgrade” sets for other manufacturers’ kits. The quality of the MiniArt road wheels and tracks are superb. And the price is good compared to after-market metal/resin link by link tracks AND you get a great set of road wheels/idler/drive sprockets as well! My sincere thanks to MiniArt for generously providing IPMS USA with this review kit.

Comparison with Academy
Previous Next