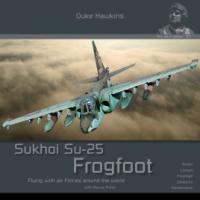 The Sukhoi Su-25 NATO reporting name: Frogfoot is a single-seat, twin-engine jet aircraft developed in the Soviet Union by Sukhoi. It was designed to provide close air support for the Soviet Ground Forces. The first prototype made its maiden flight on 22 February 1975. After testing, the aircraft went into series production in 1978 at Tbilisi in the Georgian Soviet Socialist Republic.

Early variants included the Su-25UB two-seat trainer, the Su-25BM for target-towing, and the Su-25K for export customers. Some aircraft were being upgraded to Su-25SM standard in 2012. The Su-25T and the Su-25TM (also known as the Su-39) were further developments, not produced in significant numbers. The Su-25, and the Su-34, were the only armoured, fixed-wing aircraft in production in 2007. Su-25s are in service with Russia, other CIS members, and export customers.

The type has seen combat in several conflicts during its more than 30 years in service. It was heavily involved in the Soviet–Afghan War, flying counter-insurgency missions against the Mujahideen. The Iraqi Air Force employed Su-25s against Iran during the 1980–88 Iran–Iraq War. Most were later destroyed or flown to Iran in the 1991 Persian Gulf War. The Georgian Air Force used Su-25s during the Abkhazia War from 1992 to 1993. The Macedonian Air Force used Su-25s against Albanian insurgents in the 2001 Macedonia conflict and, in 2008, Georgia and Russia both used Su-25s in the Russo-Georgian War. African states, including the Ivory Coast, Chad, and Sudan have used the Su-25 in local insurgencies and civil wars. Recently the Su-25 has seen service in the Russian intervention in the Syrian Civil War and the clashes of the 2020 Nagorno-Karabakh War.

This publication brings a complete photographic portrait of the Sukhoi Su-25 Frogfoot, the Russian jet specifically designed for close-air support missions. Since the aircraft was first introduced, the Su-25 has seen many modifications, including the introduction of a glass cockpit and modern countermeasures. These are all included in this new 116 page book!

This publication has no index, however the top outer corner of each page will show the sections' topic. The sections are broken down as follows:

The basic, single seat version is designated Su-25, whie two-seater is Su-25UB, both flown by the Russian air force. Export versions are Su-25K and Su-25 UBK respectively. The Su-25SM is an up-graded version. Several other versions are described here with images.

This section has several excellent, up-close full color images of the forward fuselage with explanatory text. The features in each image are explained. The twin nose probes are shown and explained in one photo. There are several close up views of the twin barrel cannon as well as photos of the built-in boarding ladder, and additional images of the probes..

Several up close photos of the engine air intakes are offered. The author notes the engine intake covers are attached at several locations that are indentified with tiny red trianglar markings at the attachment points.

Various access panels and other features are addressed in this section.

This section includes a number of detailed images of flaps both trailing and leading edge, pylons and wing tip pods with features noted.

The aft fuselage has a rough surface with section areas of raised rivets. There are some excellent images of the flare dispensers.

The cockpits of several versions are covered in this section. The bright orange harness belts are notable. The close up photos and text are very informative. Included are several nice photos of the K-36L ejection seat with colors noted.

Several views of the nose gear from diffferent angles are provided.

The main gear is quite robust and is shown in several excellent views. The various hydrualic piping are revealed in a number of the photos. Page 71 has two photos of ground crew throwing snow on the main gear to cool the brakes after a hard braking upon landing in an effort to prevent a fire. There are several detailed views into the main gear well.

The various details and features of the vertical tail are shown and explained here.

The wing tip speed brakes are shown in good detail here. There is an excellent photo of a Ukranian Su-25UB in flight with double fold speed brakes deployed. This Su-25UB also features a fierce shark mouth. The Su-25 wears this well.

The various details and features of the horizontall tails are shown and explained here.

Here the inner workings and access panels are revealed. This is a very useful modeling reference. Included are several images of Frogfoots on the assebly line.

There are a few images of the Tumansky R-95/R-195 engine exhaust and engine bay.

Flying low to the ground is part of the Su-25's mission and being a risky propositon some form of self-defense is necessary. Armour, flares and maneuverabilty provide the protection.

The brake chute is located below the vertical tail in the aft fuselage section. Two cross type chutes are deployed during the landing. These pages include excellent detailed up close images of the chute housing and door.

The Su-25 had 10 underwing pylons with the capability of carrying several different air-to-ground bombs and missiles, as well as air-to-air missiles. This sections offers only a few pictures of the weapons types, but has several excellent photos of the pylons details and markings.

The last section offers several photos of Su-25 in the air and on the runway. There are two photos of a Ukranian Su-25 hit by ground fire that bellied in onto a field. The aircraft was later removed and rebuilt thanks to its rugged construction.

The images are all color and are especially useful for details, weapons, markings, detail colors and color schemes used. Several special and unusual colorful paint schemes are included scattered throughout the pages that will certainly serve as inspiration for most modelers. Although paint colors are not called out the diehard modeler can research the colors for his/her project. The text is extremely helpful in understanding what the various items and features are and how used. Often the author points out details that by casual observation might be overlooked. If you are an enthusiast of modern aircraft this publication will be equally useful and enjoyable, as well as a great reference source. A great addition to anyone's reference library. If the rest of the HMH publications are anything like this these books are well worth adding to the modeler's reference library.

This is an outstanding publication and I very highly recommend this to fans of modern aircraft. The quality of the images is second to none. The author acknowledges the several people that contibuted to the images found within the covers, and all of them did a credible job. It is amazing.

I wish to thank Casemate Publications and IMPS/USA for the opportunity to review this publication Very highly recommended.