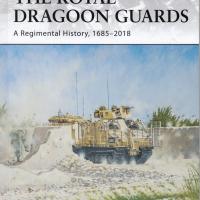 Lieutenant Colonel Peter Macfarlane served with the Royal Dragoon Guards. The Colonel of the Regiment commissioned this history to make it accessible to the public. Histories cover the facts, but there has to be a lot of research and digging to get the information which is presented here.

An explanation. Dragoons were originally organized as infantry but were mounted to give them mobility. As things advanced, they were used as heavy cavalry, armed with swords and pistols.

When World War I began, these units were used as cavalry, against German cavalry in the opening moves. Most of the fighting was done dismounted, but the horses were still useful for mobility. As the war became trench battles, the dragoons were used as a mobile reserve but also spent time in the trenches as infantry.

The antecedent units took part in some famous battles, such as Balaclave in the Crimean war. They were the heavy brigade and were not in the charge of the Light Brigade. They were at Waterloo, where the Inskillings and Royal Guards put a stop to the French infantry attack, but then they were stopped by French cavalry.

In the Battle of France in early World War II the units were equipped with infantry tanks, which were slow and under armed. These were all destroyed and abandoned at Dunkirk. When the units went ashore at Normandy, they were equipped with Cromwell or Sherman tanks, and had much better luck against the Germans.

The text doesn’t go deeply into the unit names when talking about actions, deployments or battles, but if you can keep in mind that the units were the 4th, 5th, 6th and 7th, it gets easier. Also, the Inskillings (6th) were called the “skins”.

The book is nicely written, with brief but clear descriptions of the battles and the less glamorous but still necessary smaller actions.

I did notice that they managed to stay out of North and South America.

Many thanks to Osprey Publications for this informative book, and to IPMS USA for allowing me to review it.