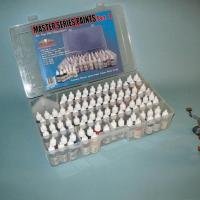 I have to admit that I am a paint addict. Part of it might be that I build every type of model and part of it is looking for that perfect paint. As I was reading another modeling publication, there was a nice ad for Reaper Miniatures and their line of paints and figures. For those who are unaware, Reaper Miniatures produces metal figures for use in RPG or role playing games and sells all the associated things needed such as paint. When Ed Pugh and Reaper offered to let IPMS review their paints, I was chomping at the bit to put these through trials on figures.

What arrived were 20 six bottle trial sets of Reaper Master Paints and one of the Master Paint Series sets- Number 6 to be exact filled with 100 plus bottles of painting delight. The first question is what would I try it on? I jumped on the Reaper web site and found a suitable miniature- Agramon- a pit fiend. Wings and fire and tusks- this was a great place to start. A quick on-line order and the package arrived weighing a ton and cast perfectly in white metal. To give the full test, I also used another miniature of a cave troll and because I wanted something bigger for airbrushing, I used Pegaso’s Eligor kit. All three of the kits were washed and primed like usual and the painting can now begin.

For brushing, the paint from the bottle is medium thin and can be thinned with water or alcohol. On Agramon, I base coated the kit with 9218 Lava Orange. Oops- FYI- all the kits were primed first naturally. The paint was thinned slightly with water and with two coats, I got a very even smooth coverage.. The wings were left this color primarily. The body of the figure was washed with a thinned version of 09223 Redstone Shadow. This was dried and then I used several of the lighter orange and yellow colors to dry brush the great details. Time now for the small brush. The teeth were picked out in white and the “scales were picked out with bright yellow. Finally, bright yellow eyes (he is a pit fiend after all) and I used a toothpick for the iris.

I started the next experiment seeing how well these paints airbrush and used a small gaming cave troll for the first part. I used water to thin and sprayed the tan front first with 9156 Desert Sand. I then used 9173 Coldstone Gray for he back. The airbrush didn’t plug, gave great coverage and control even on a piece that is only 2 inches high. The piece was finished by lightening the gray with other grays and whites and highlighting areas. The paints performed flawlessly. I brush finished the chains and eyes and his loin cloth.

Last, I wanted more room to navigate with the airbrush so I moved on to Pegaso’s 1/6 Eligor kit which I had primed and was going to brush paint. I laid down multiple coats and the wait time between them (with water as a solvent) was very low. I used the Reaper Paints for washes and also for dry brushing. They may be a little thin for drybrushing but that is good in a way in that it takes a little more time to build color. Still working on this kit but wanted to get this review in people’s hands.

In summary- it brushes great, it airbrushes great, there are hundreds of colors for both Fantasy and Normal flesh. This paint is fantastic and is most highly recommended. My thanks to Ed Pugh and Reaper Miniatures for the great product. Check them out at their web site listed above!