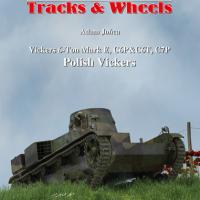 This publication covers the development and acquisition of armored vehicles for the Polish army from 1919 until 1939. Each page has several period images of the miscellaneous vehicles. Included are color profiles along with some line drawings and one blueprint of a Polish tractor. Although the text is minimal, it is quite informative. One gets the sense of the lambs being lead to the slaughter inflicted by the much superior German armor in September, 1939.

Vehicles addressed include the Vickers 6 ton Mark E types A , B and E, the C6P and C6T Tractors, the C7P artillery, and recovery and combat engineering tractors. Granted, these vehicles are certainly not as well known at those of the major World War II powers, but are quite interesting in their design and performance, and provide some unique topics.

The text includes a summary of the efforts of the Polish government to obtain Vickers tanks from Great Britain and some of the modifications required by the Poles. Performance limitations are also revealed.

Many of the images include Polish soldiers and tankers wearing the uniforms and headgear of the day. Also included are several images of Polish vehicles damaged or destroyed in combat with the German military. The image at the top of page 38 depicts the Czechoslovakian border guard building in the 1930s that still stands today.

I found this book to be quite informative and interesting. The color profiles depict the evolution of camouflage schemes from the hard edge outlined in black to the soft edge variation. The majority of the images are quite clear and show great detail that will be important to scratch builders. Highly recommended for those interested in armor development in one of the smaller eastern European nations between the wars.

Thanks to Mushroom Publications and IPMS/USA for the opportunity to review this publication.